New exclusive cruise terminal arriving at the port of Barcelona 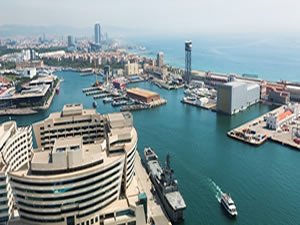 The global cruise line MSC Cruises announced that it has obtained clearance and final approval from the Port of Barcelona’s board of directors to build and manage an exclusive cruise terminal.

The contract involves the construction and operation of the terminal by MSC cruises.

The construction phase is a multiple-year concession and the lease of operations is extended for a duration of 31 years.

During this period MSC Cruises will operate the terminal.

This project is estimated to be a 33 million Euro ($ 40.2 million) investment and is expected to cover 11,670 square meters of area.

The construction work is set to start soon with the terminal entering service as early as 2024.

The MSC cruises’ executive chairman, Pierfrancesco Vago stated that the construction of this new port will allow them to expand their homeport operations.

Barcelona is a port of great import not only for the MSC cruise line but also to the parent MSC group as a whole. It is considered to be the most important port in the Western Med. MSC Cruises intends to build a port that will be viewed as a landmark in the beautiful city of Barcelona.

To this end, MSC Cruises has partnered with the globally renowned architect Ricardo Bofill and his firm to create a state-of-the-art terminal.

The terminal is planned to be eco-friendly, with both shore power facilities and LNG bunkering operations in place.

This will also allow MSC cruises to employ next-generation eco-friendly ships such as the MSC World Europa.

This is the first LNG-powered cruise ship under the MSC brand and it will enter service in 2022. Pierfrancesco Vago also stated that the terminal will have positive effects on the economy, both direct and indirect.

For instance, the large number of international guests that the terminal will attract will be spending locally and staying in local hotels.

He concluded by saying that the terminal is a testament to the MSC group’s longstanding commitment to the city of Barcelona.