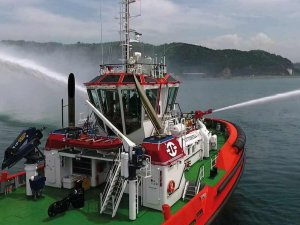 “Our MAN 175D engines would come with a selective catalytic reduction (SCR) system for IMO Tier III requirements,” Mr Watson said as he presented the concept at the Europort exhibition in Rotterdam, the Netherlands.

“We also include thrusters that are optimised for these engines and are hybrid as they have electric motors,” he said. “We include auxiliary generator sets, variable speed drives, a hybrid control and batteries in an energy storage system.”

Robert Allan’s design is for a 30-m harbour and escort tug with around 80 tonnes of bollard pull, which is sufficient for the majority of ship towage and handling operations.

“Our project was to optimise the equipment for this tug design to maximise use of the spaces in the engineroom and thruster room,” said Mr Watson. “The batteries are located where we can control the temperature to maximise efficiency and lifetime of the energy storage.”

MAN was able to reduce the size and power of the high-speed engines because the batteries can boost the energy supplied to the thrusters or propel the tug without load on the engines,

Mr Watson said this tug design has two 12V 175D engines. “With hybrid we can reduce the size of the engines from 16 cylinders to 12 cylinders, creating more space in the engineroom,” he said.

“The batteries mean this tug could run up to nine knots fully electric, so there would be no use of the engines for transits, which reduces running hours and engine maintenance.”

There would be a 10% increase in capital expenditure for building this tug design with the hybrid system. However, Mr Watson said operating costs would be lower over the lifetime of this tug. “Cost savings would depend on the operating profile of this tug,” he said. “But, the use of batteries would reduce operating costs, installing 12-cylinder engines would reduce capital expenditure and reduce maintenance costs for operators. This would reduce the total cost of ownership versus tugs with conventional propulsion.”

This Robert Allan design is ready for tug owners and builders to use for incorporating MAN engines with a pair of Schottel Rudderpropellers of SRP 490 type.

MAN’s high speed engines are installed in tug newbuilding projects. The latest of these will be by Drydocks World has it is building an azimuthing tractor tug with around 75 tonnes of bollard pull.

This tug for the Port of Barcelona will have a pair of MAN 12V175D MM engines, each rated at 2,220 kW, with SCR for IMO Tier III compliance.