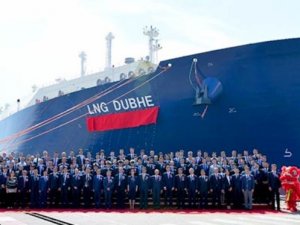 Featuring a capacity of 174,000 m3, the newly built vessel was named LNG Dubhe on September 24 at the Hudong shipyard.

The 295-meter-long unit is the first of four new conventional LNG carriers under construction for the Yamal LNG project announced at the end of June 2017.

Once delivered at the end of October, the LNG Dubhe is scheduled to start LNG transportation services for Yamal LNG.

For the time being, the vessel will carry LNG from transshipment terminals in Europe or a location where ship-to-ship transfer operations are carried out, according to MOL.

This news is a total 359 time has been read
Tags: COSCO SHIPPING LINES , lng dubhe