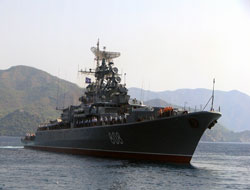 Iran's military test-fired a new surface-to-surface missile from a warship as part of exercises along a strategic shipping route.

Iran's military test-fired a new surface-to-surface missile from a warship as part of exercises along a strategic shipping route.

Iran launched six days of naval war games in the Sea of Oman and the Gulf region amid tension with the United States and Israel, which have not ruled out military action if diplomacy fails to end a row over Tehran's nuclear work.

Iran has said that, if pushed, it could close the Strait of Hormuz at the entrance to the Gulf and through which about 40 percent of the world's traded oil passes.

"The surface-to-surface Nasr-2 missile was tested in the (Sea of) Oman operational region," was reported citing state radio, following that the test took place on Saturday.

"The Nasr-2 was fired from a warship and hit its target at a distance of 30 km (19 miles) and destroyed it," the official news agency IRNA said, adding it was the first test of the new, medium-range missile.

Iran said last week it launched the large-scale naval maneuver that was to cover 50,000-square miles (129,500-sq. kilometers) of Iranian territorial waters and involve about 60 warships.

Iran regularly holds war games in the Persian Gulf and the Sea of Oman.

The West accuses Iran of seeking to build nuclear warheads, a charge Tehran denies. It insists that it wants to master nuclear technology to generate electricity so that it can export more of its huge oil and gas reserves.

Washington, which has its navy Fifth Fleet based in the Gulf Arab state of Bahrain, has pledged to keep shipping lanes open. Experts say Iran's navy would be no match for U.S. technology but could still create havoc in the waterway.

This news is a total 620 time has been read