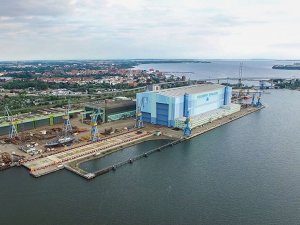 The LOI was signed with the engineering company Foreship who will be leading the design work. The agreement marks the latest newbuild deal in one of the fastest growing segments in the robust cruise ship market. MV Werften said in a press release that the ships, known as the Endeavor-class, will be 20,000 gross tons and measure 160 meters long by 23 meters wide. They will be able to accommodate up to 200 passengers in 100 suites and the same amount of crew.

The vessels will be built at MV Werften Stralsund, with production starting late 2017 and deliveries from spring 2019. The company said the LOI covers parts of the basic design, purchasing and production assistance of the vessels.

“We are excited to build a series of the world’s first purpose-built expedition yachts, with PC6 polar-class designation,” stated Jarmo Laakso, Managing Director of MV WERFTEN. “Our own staff at all sites and other subcontractors have already been fully involved in this project. Foreship has proven to be a strong and reliable cooperation partner in numerous similar large-scale projects and will be a valued support in addition to our own workforce.”

MV Werften was formed earlier this year after holding company Genting Hong Kong acquired Nordic Yards’ three shipyards in Wismar, Warnemunde and Stralsund, Germany. The new shipbuilding group has already clinched orders for ten vessels over the next five years, including the two 201,000 GT Global-class cruise ships for Star Cruises. With direct access to the Baltic Sea, the company has some of largest docks and covered cruise ship fabrication yards in Europe, and is one of only a handful of shipyards worldwide with the capacity to build the world’s biggest cruise ships.

Foreship is one of the leading cruise ship design and engineering companies worldwide, having been involved in projects such as “Quantum of the Seas” for Royal Caribbean, “Norwegian Breakaway” for Norwegian Cruise Line as well as “Mein Schiff 3” and “Mein Schiff 4” for TUI Cruises.

This news is a total 6070 time has been read
Tags: New MV Werften to Build Two Polar Expedition Ships, TURKISHMARİTİME