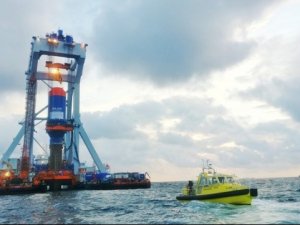 The new hammer uses a large water tank to provide a more energetic, but quieter blow for offshore installation. It is designed to reduce underwater noise levels by up to 20 dB (SEL), and is predicted to reduce the fatigue damage during installation on the pile by up to 90 percent. This could not only remove the need for underwater noise mitigation, but also enable secondary steel to be pre-welded to the monopile before installation, potentially unlocking ‘transition piece free’ designs.

Furthermore, by reducing the amount of time and number of operations carried out offshore, the piling method significantly lowers installation cost.

Data was recorded on both acceleration levels on the monopile as well as underwater noise levels in the surrounding area which will now be analyzed and interpreted to validate studies that were undertaken prior to the test. This will allow Fistuca to optimize the hammer for future use on commercial offshore wind farms.

The OWA Blue Pilot project is funded with subsidies from the Topsector Energie program by the Dutch Ministry of Economics.

This news is a total 420 time has been read
Tags: New Offshore Wind Hammer Tested