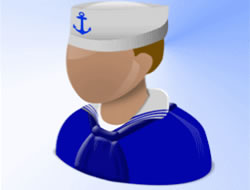 THE amended Standards of Training, Certification and Watchkeeping for Seafarers (STCW) Convention has imposed stricter rules on the hours of work for the shipping lines? crew members when at sea but little has been made to address piracy.

The amended Standards of Training, Certification and Watchkeeping for Seafarers (STCW) Convention has imposed stricter rules on the hours of work for the shipping lines" crew members when at sea but little has been made to address piracy.

At the closing of the STCW Manila Amendment on Friday, International Maritime Organization (IMO) secretary-general Efthimios Mitropoulous said that there was consensus among the delegates from about 85 countries for the said amendment, which for the first time in history gives a direction on how many hours of work that a seaman should render when at sea.

Delegates agreed to set a 10-hour rest period for a seaman in any of 24-hour period or 77 hours in a week.

The new standards provide that the hours of rest of a seaman may be divided into no more than two periods, one of which shall be at least six hours, and the intervals between consecutive periods of rest shall not exceed 14 hours.

?I am very pleased that the conference agreed, by consensus, an important new text on fitness for duty, which will create better conditions for seamen to be adequately rested before they undertake their onboard duties. Fatigue has been found to be a contributory factor to accidents at sea and to ensure seafarers" rest will play an important role in preventing casualties,? Metropoulous said.

Since the convention reached a consensus for the amendment with no objections, the new standards will come into force to all 160 IMO member countries by January 1, 2012. Some countries such as the Philippines may require ratification of the treaty before implementation of the said standards.

The said provision has been on the discussion table for months and has divided the shipping industry.

In some sectors such as the tankers and other chemical carriers, seamen need to man the ship for long hours, some for more than 18 hours at a time, since it has to get to the destination on time and unload the cargo.

Metropoulous said the convention has given exemptions from the required hours of rest to these industries provided that the rest period is not less than 70 hours in any seven day period and some other certain conditions, among other conditions.

?I am particularly pleased that the new STCW requirements on this delicate issue are consistent with the corresponding provisions of ILO"s (International Labor Organization"s) Maritime Labor Convention, 2006, which I hope will come into force soon,? he said.

On piracy, however, little has been made to address the said issue as the problem is more than just chasing off the Somali pirates that roam around the Gulf of Aden.

At the moment, there are at least 65 Filipinos from four ships that are still being held hostage by Somali pirates.

?We need to bring back Somalia to political stability,? he said, but added that IMO"s main goals on the issue at the moment are safety of life at sea and cargo ships of the World Food Program that give aid to Somalia should reach its destination.

On the other hand, the delegates also approved new training and certification requirements for seamen. These include new training for marine environment awareness training; leadership and teamwork; for electro-technical officers; for security training, as well as provisions to ensure that seafarers are properly trained to cope if their ship comes under attack by pirates.

This news is a total 3834 time has been read