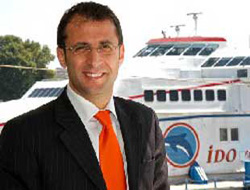 Over the last 4,5 years Istanbul Seabuses and Fast Ferries Inc. (IDO), which has invested more than 200 million $, came up with 100 million passengers for a year.

Over the last 4,5 years Istanbul Seabuses and Fast Ferries Inc. (IDO), which has invested more than 200 million $, came up with 100 million passengers for a year.

Today IDO oparates 100 vessels carrying 100 million passengers with speed growth in the last 4,5 years and reached at 350 million indorsement. IDO, which attracts European firms at first, has started to be discussed by the other devepoled countries on shipping sector.

With 210 members from 25 countries and more than 300 firms Interferry appointed IDO general manager Ahmet Paksoy as the president. Also Interferry organizes its 2009 annual conference in Istanbul.

Attendance will be more than 1000

Drawing attention to the importance of conference for Turkey Ahmet Paksoy noted that nearly 1000 managers of 210 seaway firms will attend the Interferry conference in Istanbul on October 2009.

In the Istanbul 2009 Interferry conference, the representatives of Turkish shipping sector and the most popular firms in the world will discuss the issues regarding marine transportation such as marine safety, environment, management, international transportation, operations and security.

Ahmet Paksoy, "With escalating profile, IDO succeeded to attract all industry by its investments. We ended last year nearly by 350 million new turkish lira indorsement. Our purpose for 2008 to get over 400 million new turkish lira. We increased the number of routes in last years. Our investment had got over 500 million dollar in the last 4,5 years. We are increasing the number of ports in order to solve İstanbul traffic problem. We carry 100 million passengers and 6,5 million vehicles in a year" said.

"There are more than 3000 employees in IDO. 1200 cruise realized in a day. We pay attention to work faultless. Bandirma cruises are increasing in summer and in winter generally inner-city cruises are at favor. Besides, we are planning to focus on Ro-Ro transportation to ease the iner-city transportation. This project, that we will declare on days to come, may be a solution traffic congestion in İstanbul" he added.

Ahmet Paksoy noted that we take part in the privatization program of Istanbul metropolitan municipality as IDO. " This privatization is very important for us. Many firms at abroad interested in IDO. This interest comes from many European countries and Japan which are advanced on shipping. The value of our firm is quite high. But I don"t approve to declare this. We are ready for privatization" said Paksoy.

This news is a total 1408 time has been read