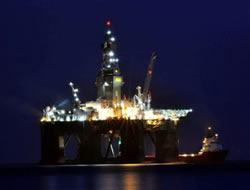 The new platform arrives as part of a recent deal between the Turkish Petroleum Corporation (TPAO) and ExxonMobil, a leading international oil company, over joint exploration for oil off the Black Sea coast. A Norwegian oil exploration platform, Leiv Eiriksson, is currently carrying out drilling operations separately in the Black Sea for TPAO and its Brazilian partner Petrobras.

Y?ld?z said the platform, one of the most technologically advanced in world, would start oil exploration in the Black Sea before the end of April. He was speaking during a signing ceremony at the third round of a joint working group between TPAO and Ukrainian gas company Naftogaz. TPAO and its Ukranian partner had earlier established a joint working group and commenced talks for joint oil exploration off the Black Sea coast.

The new platform, named Deepwater Champion, will render it possible to conduct deeper offshore exploration. A sixth-generation drilling ship that is able to search for oil in seas of up to 3,660 meters in depth, it can delve into the earth up to 12,190 meters below sea level. Its portable structure will enable Champion to easily pass through the Bosporus since it can float beneath the bridges across the Bosporus.

Dependent on oil imports, Turkey seeks opportunities for alternative sources of oil both in the Mediterranean and the Black seas to reduce dependence on foreign sources. The Black Sea is estimated to hold some 10 billion barrels of oil, enough to cover Turkey's oil needs for the next 50 years. It is believed to hold also 3 trillion cubic meters of natural gas.