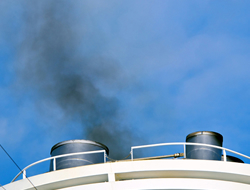 The European Unions planned rules to monitor greenhouse gases from ships must be in line with international law to avoid conflicts with other nations, according to member states including Italy and Ireland.

Draft rules to introduce monitoring, reporting and verification of carbon dioxide from ships starting in 2018 were discussed by EU environment ministers at a quarterly meeting in Brussels today. The European Commission, the 28-nation bloc’s regulatory arm, proposed the law in June to encourage global curbs on maritime pollution tied to climate change.

The proposal on shipping emissions followed the expansion of the EU carbon cap-and-trade program to international airlines last year, a move that spurred opposition from countries from the U.S. to China to Russia and triggered threats of a trade war. The draft law on ships doesn’t impose any pollution limits and aims to encourage the maritime industry to cut discharges by increasing transparency.

“Ireland supports the objective of the proposed regulation,” the country’s Environment Minister Phil Hogan said during a ministerial debate today. “In this context, it’s important that we take on board lessons from our experiences with the aviation sector and seek to ensure that what we’re proposing to do at the EU level will contribute to further progress at the wider international level in the IMO.”

The draft law, proposed after the International Maritime Organization made little progress in the past decade to agree on a global framework, would oblige the owners of ships larger than 5,000 gross tons using EU ports to report annual discharges of carbon dioxide, the main gas blamed for global warming. The measure is meant to be a “building block” for worldwide emission curbs and needs support from EU governments and the European Parliament to become a law.

Global maritime transport accounts for 3 percent of international CO2 discharges, and emissions from ships are expected to more than double by 2050, according to the commission. The proposed European system would cut pollution from the journeys covered by as much as 2 percent compared with a “business as usual” scenario and reduce net costs to ship owners by as much as 1.2 billion euros ($1.6 billion) a year in 2030, the commission has said.

“Given the international dimension of climate change and indeed the international character of maritimetransport, action at global level will always be more effective than at regional level,” EU Climate Commissioner Connie Hedegaard told ministers today. “However, global progress, or a lack of global progress, should not defer us from taking relevant policy actions at the EU level.”

This news is a total 1253 time has been read