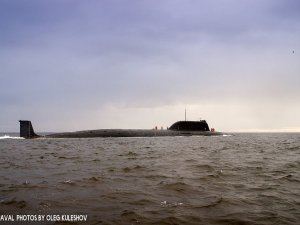 The latest Project Yasen-M multirole nuclear-powered submarine Kazan fired a torpedo to strike a naval target during its trials in the White Sea, the press office of Russia’s Northern Fleet reported on Friday, December 6, 2019.

The test-fire was conducted at a special naval range of the Northern Fleet and the naval target was successfully destroyed, according to the Russian Navy press office.

The Kazan is the first multirole nuclear-powered submarine of the improved Project 885M (Yasen-M). It was laid out at the Sevmash Shipyard in 2009 and floated out on March 31, 2017. The sub is expected to join Russia’s Northern Fleet where the lead Yasen-class submarine Severodvinsk is in operation. The Sevmash Shipyard is currently building five more submarines of this Project.

The Yasen-class nuclear submarines are presumed to be armed with land-attack cruise missiles, anti-ship missiles, anti-submarine missiles including the P-800 Oniks SLCM, Kalibr family SLCM or 3M51 SLCM.[9] Kalibr-PL has several variants including the 3M54K (terminal-supersonic) and 3M54K1 (subsonic) anti-ship, 91R1 anti-submarine, and the 3M14K land-attack variant. In the future, there will be also an option to install the hypersonic 3M22 Zircon cruise missiles on upgraded 855M boats.

Each submarine can carry 32 Kalibr or 24 Oniks (other sources claim 40 Kalibr and 32 Oniks)[34] cruise missiles which are stored in eight (ten for 855M) vertical launchers (additional missiles may be carried in the torpedo room at the expense of torpedoes). It will also have eight 650 mm and two 533 mm tubes as well as mines and anti-ship missiles such as the RPK-7.