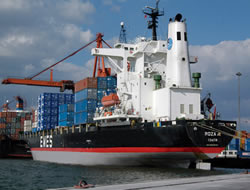 EMES now offers service to Casablanca, the largest city in Morocco. The service originates in the port of Fos, which is east of Marseilles and plays an important role in France"s import and export business. In place since the month of April, this service is also beneficial for Turkish industries that want to import goods from France.

EMES, a company that operates regular shipping lines between Black Sea and Mediterranean ports, has now added service from the port of Fos in France to the port of Casablanca in Morocco as a response to increasing requests for shipments due to increasing trade volume between France and Morocco. Two vessels operate on this line, which has a transit time of six days from Fos to Casablanca with the following route: Fos-Barcelona-Castellon- Valencia-Algeciras-Casablanca-Algeciras-Alicante-Fos. The port of Fos is used for shipping all kinds of cargo and has a strategic location in southern Europe. For this reason, it is a very popular port in the Mediterranean for importers and exporters.

Advantageous for imports from France and Spain

This service also offers advantages for companies that want to import goods from France and Spain to Turkey, because it enables cargo to be shipped to Istanbul, Gemlik and Izmir via transfer through Barcelona. France ranks 6th and Spain ranks 11th among countries from which Turkey imports goods. Motor vehicles are the largest category of goods that Turkey imports from France, while goods for the automotive industry are imported from Spain.

This news is a total 8978 time has been read