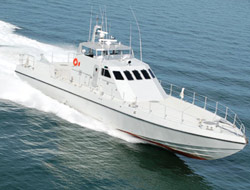 Constructed using advanced composite building materials, the craft is an enhanced version of USMI's 82 ft Mark V SOC interdiction craft, currently in use by U.S. Special Operations Command. The MKV-PB(C) provides the users with a galley and accommodations for a crew of 12, including three separate staterooms for officers.

"Both the customer and USMI are thrilled with the performance of the craft during these trials. The craft reached speeds of over 50 knots, which exceeds the contract requirement of 45 knots," said Barry Dreyfus, Jr., USMI's CEO.

This variant design originally began through the insight and perseverance of USMI's founder, the late Tom Dreyfus, in 2001.

"My father designed the first generation of this craft known as the MKV. All through the design process of this enhanced version he would tell anyone who would listen that this craft was going to run like a scalded dog and would exceed the requirement of 45 knots. I just wish he could be here today to see his hard work come to fruition, but I know he is with our late USMI president Larry Ellis and both are very proud of what we have accomplished in their absence," Barry Dreyfus said.

Sea trials of this new craft also underscore USMI's success in rebuilding after its primary facilities were destroyed by Hurricane Katrina, causing the company to open a new boat building facility in Gulfport over two years ago while rebuilding a New Orleans presence.

USMI is the premier builder of high-performance, special mission capable boats for military and other agency use. The company also produces the Special Operations Craft Riverine (SOC-R) and the Naval Special Warfare Rigid Inflatable Boats (NSWRIB's) that have seen extensive use by the U.S. special operations forces.

This news is a total 1819 time has been read