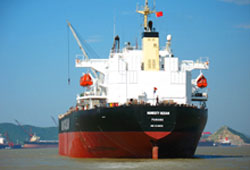 Handymax owners have nearly doubled their daily rates for trips to the Far East that pass through the Gulf of Aden due to fears of further piracy attacks.

Handymax owners have nearly doubled their daily rates for trips to the Far East that pass through the Gulf of Aden due to fears of further piracy attacks.

Bekkert fixed the 42,648 dwt Barra with prompt delivery at Canakkale, Turkey for two laden legs with redelivery in the Far East at $11,000 per day. ICAP Shipping"s handymax index, which covers a 45,000 dwt bulker, was today $7,250 per day for a trip from Canakkale to the Far East.

?The Mediterranean and Black Sea are less dramatic, although owners are resisting trips that transit the Gulf of Aden and have bumped up rates accordingly,? said ICAP Shipping. ?The volume of trade in this direction has dropped as a result.?

A London broker told that, if confirmed, the Barra fixture saw a near doubling in rates compared with last week.

Many high profile shipping companies are considering re-routing around the Cape of Good Hope, rather than sailing near Somalia"s hotbed of piracy.

But charterers are unlikely to want to add an extra 15 days onto a trip from the Black Sea to the east.

?That"s a hell of a thing to have to stomach, so the Black Sea to Middle East trade is definitely being affected by piracy,? the London broker said.

While there weren"t ample supplies of fresh cargoes available in the Black Sea, the broker said that for ?good? ships, owners and operators were getting a premium.

Nonetheless, the market is faced with a potential shortfall, with a large number of vessels still lurking to trade on a spot basis, and others laid up waiting for better rates to return.

?It does affect the market that there are a few ships that aren"t even trading,? the broker said. ?It"s weird, as it"s like a safety valve. Let"s say, when rates hit $15,000 [per day], they all say "let"s trade and bring it [rates] straight back down again".

?It"s a strange situation that will have some treading the line by trying to get tonnage involved when they see a better rate, so it"s going to be very up and down.?

Overall, the broker was upbeat about the market"s prospects for early next week, adding that rates will continue to firm under the head of steam that has built up during this week.

Owners fixing supramax tonnage from West Africa to the Black Sea are commanding between $6,000-$8,000 per day, depending on the size of ship.

Meanwhile, the London broker said that rates in the South Atlantic were lagging behind and were not ?vastly better yet?.

Commenting on the Atlantic market, ICAP Shipping said it continued to move in a ?steady pattern, with levels seemingly finding a plateau momentarily?.

On signs of a ?scrabble? for US Gulf ships, ICAP Shipping said this is likely to result in a positive move in rates.