New terminals to be built this year 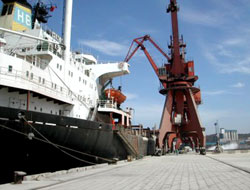 Yingkou Port Group has jumped on the expansion bandwagon to spend up to $439m to build new terminals this year.

Yingkou Port Group has jumped on the expansion bandwagon to spend up to $439m to build new terminals this year.

Yingkou Port Group has jumped on the expansion bandwagon, joining other northern Chinese ports with plans to spend up to Yuan3bn ($439m) to build new terminals this year.

?We will provide 35% of the funds using internal resources and borrow the rest from banks,? Mr Gao said.

Focusing on the handling of oil and bulk cargoes, mainly exports of grain and imports of iron ore, Yingkou managed to boost volumes by 6% in the first two months this year, according to Mr Gao, while may other Chinese ports, especially those in the south, saw a decline in volumes.

Shanghai-listed Yingkou Port Co, a 59.6%-owned subsidiary of YPG, said that it targets to earn operating income of Yuan 2.2bn and net profit of Yuan 258m this year in a regulatory filing on Friday.

The firm handled about 60% of the total volume in Yingkou and posted consolidated operating income of Yuan1.9bn, and net profit of 305m in 2008, representing increases of 53% and 54% respectively from 2007.

The company handled 70m tonnes of cargo last year, representing a more than 20% increase from 2007.

Meanwhile, Dalian port, the closest neighbour of Yingkou, recently said that it would increase its stake substantially in Jinzhou port, a bulk and container port in Liaoning province, this year to speed up the consolidation between the two ports.