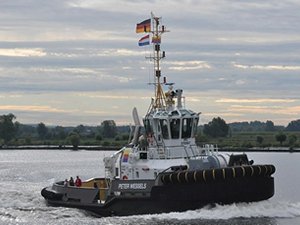 Louis Meyer (Neue Schleppdampfschiffsreederei) has brought a new ASD tug, designed and built by Damen Shipyards, to Germany to improve towage of barges, container ships and tankers in the northern coast. It has purchased Peter Wessels, a 28-m long tug with 60 tonnes of bollard pull.

Damen built this tug to an ASD 2810 design after signing a contract with Louis Meyer in April 2020. Louis Meyer has chartered Peter Wessels out to Emder Schlepp-Betrieb (ESB), which operates from the busy Port of Emden, Lower Saxony.

This addition boosted ESB’s fleet to five vessels. Peter Wessels was already built for Damen’s own stock in Damen Song Cam Shipyard and then transported to Europe as part of a batch. It was completed to Louis Meyer’s requirements at Damen Shipyards in Gorinchem, the Netherlands.

Peter Wessels features several options, most notably a winch on the aft deck for coastal towage of barges, a sewage treatment plant, a boiler and heated windows.

This news is a total 2443 time has been read
Tags: Louis Meyer , Damen Shipyards , Port of Emden , tugs / workboats