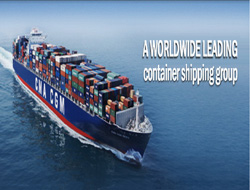 CMA CGM is to launch a rationalized version of its NEMO (North Europe, Med, Oceania) service, offering 'the fastest and only direct and dedicated link from Europe to Australia via Suez.'

New NEMO will serve Australia directly from Europe and the Mediterranean

CMA CGM is to launch a rationalized version of its NEMO (North Europe, Med, Oceania) service, offering 'the fastest and only direct and dedicated link from Europe to Australia via Suez.'

To be launched end November and operated in partnership with Hapag Lloyd (50/50), NEW NEMO will now serve Australia directly from Europe and the Mediterranean, calling Southeast Asia and the Indian subcontinen on the return westbound leg.

?This new design of the NEMO service allows us to rationalize our offer between Europe and Australia. It guarantees CMA CGM customers highly competitive transit times while strengthening our regional coverage on this expanding market, with calls in the 5 major Australian ports of Fremantle, Melbourne, Sydney, Brisbane and Adelaide?, explains Jean-François Guittet, Senior Vice President Africa Oceania and Indian Ocean Lines.

New Zealand will continue to be served directly by the CMA CGM PAD service (Panama direct), together with relay options using the CMA CGM Group network in the ANZ zone.

The first vessel to be deployed on the NEW NEMO will be the CMA CGM Galilée end of November from North Europe. Cargo Ship Runs Aground off Scottish CoastA Norwegian cargo vessel ran aground off the Isle of Skye, Scotland, on March 23. Ammonia as Carbon-Free Fuel: Wärtsilä Conducts First Combustion TrialsFinnish technology group Wärtsilä has initiated combustion trials using ammonia to prepare itself for the use of ammonia as a fuel that can contribute to reducing both the shipping’s and energy sectors’ greenhouse gas emissions.