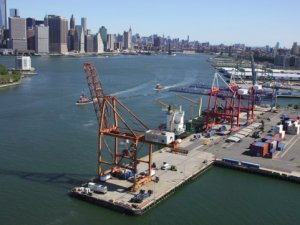 The City of New York has announced a $100 million investment plan to increase maritime and rail freight transportation within the city's boroughs, reducing congestion from trucking and creating new jobs in longshore and vessel operations.

The City of New York has announced a $100 million investment plan to increase maritime and rail freight transportation within the city's boroughs, reducing congestion from trucking and creating new jobs in longshore and vessel operations. New York currently handles about 90 percent of its freight by truck, and it would like to increase the portion handled by waterborne and rail services.

"More than almost any other city, New York relies on trucks to move freight," said Deputy Mayor Alicia Glen, speaking to reporters on Monday. “Our method of getting stuff to people and stores . . . is outdated and inefficient." With the $100 million "Freight NYC" plan, the city believes that it could create 5,000 new jobs and eliminate about 40 million truck miles a year from the city's aging freeways.

The city has existing waterfront infrastructure to build on, but much of it dates back to the early years of the 20th century and is in need of modernization. The New York City Economic Development Corporation envisions a $65 million investment to build out new terminals in New York Harbor and attract an operator to run barge services to various distribution points around the city, including the South Brooklyn Marine Terminal in Sunset Park and the Hunts Point Food Distribution Center in the Bronx. More maintenance dredging of the city's working waterways (Newtown Creek, Gowanus Canal, Flushing Bay and Eastchester Creek) would allow barge transportation to reach other parts of the boroughs as well. The proposed service has precedent: the Port of New York and New Jersey currently operates a cross-harbor, container-on-barge service linking the Port Newark Container Terminal with Red Hook Container Terminal, bringing international cargo by water to Brooklyn.

In advocating for better maritime infrastructure, EDC points to the role of the city's existing marine terminals in reducing truck traffic and providing good-paying jobs. The Red Hook Container Terminal in Brooklyn, which handles a significant portion of the city's reefer cargo, employs 400 people and eliminates about 30,000 truck trips per year on New York's streets. The terminal has warehousing space on site, reducing the need for additional truck trips to distribution centers. By contrast, cargoes that arrive in New Jersey are usually trucked to warehouses well outside of New York City's limits, where they are reloaded for trucking back into the five boroughs - an inefficient process that increases road miles, congestion and emissions.

In addition, the city wants to invest $35 million in new rail yard and transload facilities to bring rail cargo closer to the final destination and increase businesses' access to national rail networks. This plan would include five transload sites within Brooklyn and Queens, new rail spurs to serve industrial users, new rail sidings to improve traffic flow, and rail improvements at Sunset Park and Hunts Point.

This news is a total 677 time has been read
Tags: New York Launches $100M Barge and Rail Freight Program