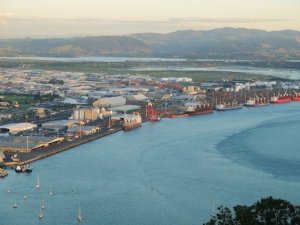 The worst hit port looks likely to be Wellington which is operated by a company called CentrePort.
Chief executive Derek Nind said in a statement that CentrePort staff carried out inspections of port property and assets during daylight hours today.

“We have sustained damage to buildings and the port and also some liquefaction and differential settlement in places,” he said.

CentrePort said it was working through a process with tenants to ensure all buildings were safe before they were re-occupied, which would happen over the coming days.

One of the buildings on CentrePort land is the BNZ Building, damaged during an earlier earthquake, and the offices of the Regional Council, which (with the city council) owns the port company.

Port companies in Napier, Timaru and Christchurch are also dealing with the fallout of the natural disaster.

This news is a total 2936 time has been read
Tags: New Zealand ports assess earthquake damage