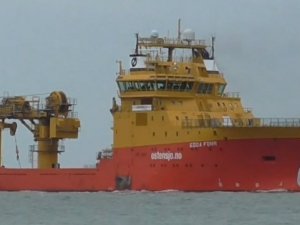 The New Zealand Government has approved the purchase of a dive and hydrographic support vessel for the Royal New Zealand Navy.

The 85-meter (280-foot) Norwegian built multi-role offshore support vessel, the Edda Fonn, will be outfitted with the dive and hydrographic systems required by the Defence Force, before being delivered to Devonport Naval Base in May 2019.

The dive and hydrographic vessel will replace HMNZS Resolution and HMNZS Manawanui. The two vessels were decommissioned from the Navy in 2012 and 2018 respectively, following several decades of service. The modern design and systems of the vessel will provide improved capacity, speed, safety, and capability over the previous vessels. Some of these new and enhanced capabilities include a 100t salvage crane, a remotely operated vehicle and a contemporary dynamic positioning system.

“The MV Edda Fonn will be a great addition to the Navy,” says Defence Minister Ron Mark.  “Not only will it meet the Government’s needs, it will be in service three years earlier than a newly built ship would have been.”

In recent years, the Navy’s specialist divers and hydrographers have undertaken underwater search and rescue with the New Zealand Police, surveyed the seabed following the Kaikoura earthquake and removing unexploded historical ordnance in the Pacific islands.

Edda Fonn is owned and operated by Norwegian company Østensjø Rederi, and the vessel was chosen from a list of over 150 candidate offshore and subsea support vessels. The vessel generally operates in the North Sea, and is under lease until the end of 2018, following which the modification process will begin.

Once delivered, final modifications will be undertaken in New Zealand. It is expected that New Zealand industry will be involved in this part of the project.  The ship is expected to be in service with the Navy by November 2019. The project budget for the purchase, modifications and introduction into service of the dive and hydrographic capability is $103 million. This has been funded through an existing appropriation.

Earlier this month, a keel laying ceremony was held for the Royal New Zealand Navy's new polar-class support vessel Aotearoa, the largest ship the Navy has operated to date. The 26,000 ton tanker and replenishment vessel is being built by Hyundai Heavy Industries as part of New Zealand's Maritime Sustainment Capability project. The multi-purpose vessel will provide refuelling services, freshwater generation, significant cargo-carrying capability and the ability to conduct air patrols with an embarked Seasprite or NH90 helicopter.

Aotearoa will replace the now decommissioned tanker HMNZS Endeavour. Expected to enter service in 2020, she represents the first of a new fleet of ships built specifically to address the global requirements of the New Zealand Defence Force and government agencies for deployment from Antarctica to the Arabian Gulf.

This news is a total 435 time has been read
Tags: New Zealand to Buy Norwegian OSV for Navy