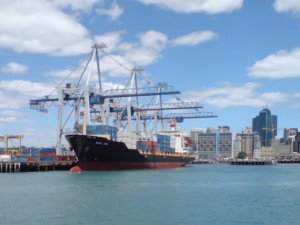 Ports of Auckland today unveiled its 30 year development plan, which would see infrastructure improvements and significant automation investment to double annual capacity and the extension of a wharf by 13 m to dandle larger boxships.

However, Jacinda Ardem, who became New Zealand's 40th prime minister last week, gave the impression she was unimpressed with the plans. Speaking to the press having met with Auckland's mayor today, Ardern said: ''What I'm happ to say is that I have always opposed port expansion at its current site.''

There is an ongoing debate in Aucland, New Zealand's largest city, about moving the entire port to a new location in Whangarei.

This news is a total 480 time has been read
Tags: New Zealand's new PM dismisses Ports of Auckland's development plans