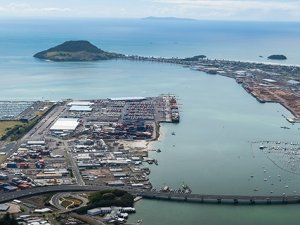 Port of Tauranga’s half-year result on Friday is expected to show New Zealand’s largest port is on track to deliver full-year earnings at the top end of its guidance of NZ $88 million (USD 64.40 million) to NZ $92 million (USD 67.33 million).

Analysts said that continued strong momentum in container and log volumes since the company’s buoyant first quarter activity report meant the market was looking for a number at the upper end of the guidance.

“If the margins are starting to improve in the business that could be the upside surprise,” said Craigs Investment Partners senior research analyst Mohandeep Singh. Craigs is forecasting the port company will make another full-year special dividend of 5c per share on top of a usual dividend in line with its capital management programme.

In a market note last month FNZC research analyst Paul Turnbull said that FNZC’s revised forecast for 2018 full-year net profit after tax of NZ $93.3 million (USD 68.28 million) now sat above the top of the guidance range. Industry indications were that transhipment volume growth momentum had remained strong at the Tauranga container terminal in the second quarter.

The port company said that in October that transhipment container growth was nearly 87 per cent, with total container growth of 26.4 per cent in the first quarter compared to the previous corresponding period. Log volumes had lifted by 13 per cent.

Transport Ministry trade data showed the port’s share of the New Zealand container trade lifted to nearly 40 per cent in year to September. The market was looking for the company to turn volume growth of the past two years into margin growth and to generate more revenue from the volumes.

“A slight disappointment in the past that the operating leverage in the business has been poorer than you would expect despite strong volume growth. It hasn’t translated into an as strong top line or earnings growth,” Singh added.

As they start to get their ducks in a row and get some margin improvement that will translate into a surprise on the earnings front and will be taken more positively by the market. They’re in a phase where they can reap the rewards of the all capital expenditure they’ve done and actually take advantage of the tail wind of the general economy doing well with more exports and imports going through the port.

The company, which reported a New Zealand port record of handling more than one million containers in 2017, last year completed a NZ $350 million (USD 256.15 million) expansion. This included dredging to widen and deepen its harbour entrance to accommodate larger ships, enabling some of the world’s biggest container ships to call at New Zealand for the first time.

The project also ensured it could be the big ships’ only stop in New Zealand for some years. Singh said that the deepening project gave the Port of Tauranga a “first mover advantage”. Other New Zealand ports were possibly five to 10 years behind the resource consent starting line.

This advantage could be reflected in the port’s share price, which analysts covering the stock concluded was expensive, Singh said. “It’s a key advantage and maybe it’s wrong for that to be reflected in the share price. Maybe it’s looking expensive at these levels but there are a lot of New Zealand companies priced to perfection which are starting to look a bit expensive. And many don’t have such an attractive structure and nothing like the track record.”

Singh said that the market would be looking for the port company to contain costs this financial year after the recent capital expenditure. “Their costs were bumped a bit so efficiency came down. They’re looking to reduce costs by 10 per cent over the next two years in terms of port running costs.”

This news is a total 475 time has been read
Tags: New Zealand’s Port of Tauranga Result Tipped to Confirm Strong Growth