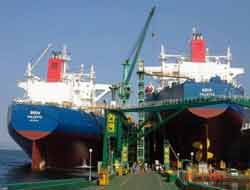 Geden Lines of Turkey has booked two more 115.000-dwt tankers at Samsung Heavy Industries, bringing the total number of aframaxes it has on order there to 11.

Geden Lines of Turkey has quietly upped its newbuilding tally with additional orders.

The company has booked two more 115.000-dwt tankers at Samsung Heavy Industries, bringing the total number of aframaxes it has on order there to 11.

The latest pair, hull numbers 1757 and 1758, were ordered early this year and are set for delivery in the second and fourth puarters of 2010.

Geden board member Tugrul Tokgoz told TradeWinds last month that the company was booking a series of 53.000-dwt bulkers at Sino Pacific Heavy Industries for delivery in 2009. It is now understood this order will be for four vessels, not the six originally mooted, and that it will be inked in the near future.

The company says that since 2000, it has signed a total of 81 newbuilding contracts worth $3.6bn. Of these, 38 vessels have been resold, netting profits of more than $400m.

In addition to the 11 Samsung aframaxes. Geden has 11 products/chemical tankers on order at Hyundai Mipo Dockyard, of which seven are 37,000-dwt ice-class 1A and four are 47,000-dwt vessels.

This news is a total 4756 time has been read