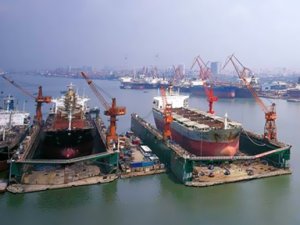 Newbuilding ordering activity is firming up on increased demand by shipowners, who are convinced of the long-term rebound of freight rates and are willing to commit funds. In its latest weekly report

Shipbroker Allied Shipbroking said that “this week’s activity put things in a more aggressive mode in terms of ordering, with the main drivers in the market pushing things forward once more and an increased flow of newbuilding orders now restored. The dry sector, after a period of slightly slower activity, showed a rebound with many fresh orders coming to light, opposing in a way the downward correction being noted in the freight market these past couple of days. On the tanker side though, given the uncertainty surrounding the market, the improved flow of new orders is leaving many questions regarding the true drivers behind these orders. The following weeks will present a clearer picture on whether we are talking about a more positive outlook amongst market participants, or rather a speculative attitude given the current investment drive. All in all, the continuous flow of new projects, combined with the numerous options being declared, are slowly building a more confident perspective and a positive momentum on the market.

In a separate newbuilding market report, shipbroker Clarkson Platou Hellas said that there were “five new orders to report this week with the focus on the Dry market. Polaris Shipping have extended their series of 325,000 DWT VLOCs at Hyundai Heavy Industries (HHI) by declaring an option for five more units. The last vessel will be delivered in 2022 and will be the 15th unit in the series. HHI have won another order for two firm 325,000 DWT VLOCs from Korea Line. These two units will be delivered in 4Q 2019 and 1Q 2020 respectively. Jiangsu New YZJ have signed a contract for one firm plus one optional 82,000 DWT Kamsarmaxes with Zihni Shipping & Trading for deliver in 2019. Also from China, Chengxi Shipyard have also received an order for two 64,000 DWT Wood-chip Carriers from Nova Shipping & Logistics for delivery in 2019. These are the options declared by Nova and will be the 3rd and 4th vessels in the series. Finally, Fujian Southeast Shipbuilding have won an order for one 20,500 DWT Bulk Carrier from domestic owner Fujian Yonghang Shipping. This single unit is set for delivery in 2019”, said Clarkson Platou Hellas.

Meanwhile, in the S&P market this past week, Allied said that “on the dry bulk side, activity continues to be very firm with another strong week having gone by in terms of vessels changing hands. At the same time things seem to still be “stuck” on the pricing front, with the intense competition amongst buyers still unable to produce any fruitful increase against the price levels seen on similar last done deals. Despite this, there still seems to be a strong momentum building under the surface, while it looks to be partly held back by the more moderate pace being seen in the freight market. It seems that we have limited appetite for large speculations similar to those seen earlier in the year. On the tanker side, another week of limited activity to be noted, with a shortage of sales candidates coming to market and facing the current going price levels. Buyer are also still looking to hold a position on the sidelines, looking to act more so against a bargain opportunity rather than meet the sellers at their going price ideas”, the shipbroker noted.
In a separate note, ships’ valuations expert VesselsValue said this week that, in the dry bulk market, values for bulkers remained stable, albeit with a slight firming in Handysize values. “Privocean (81,400 DWT, 2013, SPP) was sold to Eastern Mediterranean Maritime for USD 21 vs VV value USD 21.01. Nandini (56,100 DWT, 2007, Mitsui Tamano) sold for USD 12 mil vs VV value USD 12.28. IVS Kite (32,600 DWT, 2002, Kanda) sold for USD 6.7 mil vs VV value USD 5.59 million”. A similar stablizing values’ trend was also noted in the tanker market as well. According to VV, the Gener8 Zeus (318,200 DWT, 2010, HHI) sold for USD 53 mil (incl 1 week subjects) to International Seaways.

This news is a total 3704 time has been read
Tags: Newbuilding ordering activity firms up as owners look to boost their fleet