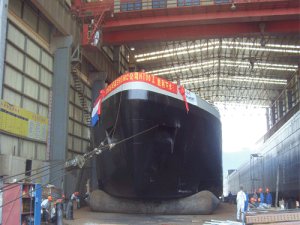 Tankers are still the main focus of ship owners who are willing to shell out the necessary money to move forward with newbuilding orders.

In its latest weekly report, Allied Shipbroking noted that “the tanker market continues to be the driving force behind the new-building market this week, with the limited amount of new orders that surfaced almost exclusively revolving around the larger crude oil car-riers and the larger product tankers.

However, according to Allied, “this trend now is likely to soften however as things have started to get slightly shaky in terms of earn-ings for tankers as well, while the main bullish market for crude oil consumption, namely China, is looking to be in a shaky state itself. The difficulty in attracting new interest from potential buyers will likely trouble shipbuilders for the remainder of 2015, while as things stand now its looks to be a difficult 2016 as well. All this means that as the orderbooks shrink further inevitably we will continue to see competi-tive pricing and further consolidation, while as costs remain fairly unchanged the market will be dominated by the more competitive shipbuilders around and ones with the most favorable position to continue to gain support from both the private and respective gov-ernment bodies. The main thing to take in is that as things hold it looks as though there is now rush to place orders so as to gain favora-ble pricing while the only motivator might be a slight incline to secure earlier slots if you are of the belief that a market turnaround is close”, the shipbroker concluded.

In a separate report, Intermodal said that “we are impressed by the healthy levels of newbuilding activity that were reported for yet another week in the market, not only because of the timing within the year that this pick-up on ordering has been taking place, but also because the newbuilding story remains a bit hard to “sell” across not only the dry bulk but also the tanker sector. One would think that the drop in tanker rates over the past couple of months, together with the fairly priced modern tonnage available for sale out there, would make a strong argument for investing in second-hand units rather than newbuilding ones at the moment, but a number of tanker owners still opt for the newbuilding route. Once more tanker orders made up for the bigger part of freshly inked deals, while these ranged across a number of sizes from VLCC down to smaller, specialized tankers. Over at the container side on the other hand, reported orders showed a clear preference for larger vessels, with Far Eastern owners monopolizing activity. In terms of recently reported deals Chinese owner, Dalian Ocean has placed an order for one firm VLCC (319,000dwt) at Dalian Cosco, in China, for a price in the region of $92.0m and delivery set in 2018″, said the shipbroker.

Meanwhile, in the S&P market, Allied said that “with recent sale in the dry bulk market having shown a firmer face, it seems as though there has been a considerable pick up in prices. This however has been mainly focused around the few Japanese built as-sets which not only attract stronger interest but are ever fewer avail-able for sale in the market. Inevitably though and with the current turmoil in market, this recent upswing may well prove to be unsus-tainable, despite having been fairly well support by the freight market up until now. On the tanker side, the firming in both interest and prices continues propelling older age assets out of obscurity and back into buyers fa-vor, as they search to find an entrance into this recently high perform-ing market. This is not to say that it will be a smooth ride over the coming months, as the global markets start to show difficulty in sus-taining an ever higher consumption of crude oil and its by-products”, the shipbroker mentioned.

Finally, in the demolition market, Allied noted that “it continues to recover closer to its pre summer pricing levels, with Indian shipbreakers pushing harder to secure tonnage while gaining support from the limited allowance of inflows of cheap Chinese steel within their local market. Pakistan has been trying to keep its place in the market, following in suite of the offers given by their Indian counterparts, though their appetite seems to have only just started possibly giving a sense of better numbers to come over the coming days. The only market in the Indian Sub-Continent to be suffering at the moment seems to be that of Bangladesh still finding it difficult to compete thanks to the cartel formed their which has been keeping price levels offered under strict caps. As things stand now it looks as though some further gains could be made, though it will be hard to make up the ground lost during early June. What looks to be a certainty right now is that potential sellers need to see better prices on offer in order to entice them to the possibility of scrapping, as such keeping activity overall subdued for now, the shipbroker concluded.

This news is a total 9070 time has been read
Tags: newbuilding, order, tanker, turkishmaritime