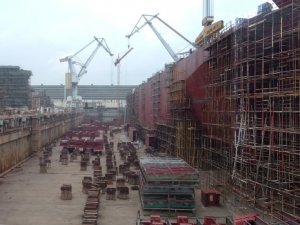 Ship owners are still mostly bullish when it comes to committing future capital for newbuilding investments. In its latest weekly report

Allied Shipbroking said that “we are still seeing a fair amount of activity emerge on the dry bulk side, as buying appetite continues to be firm with most looking to tie up any still available TIER II slots before the window of opportunity is closed shut. In this regard it is already proving difficult with only a hand full of yards still able to offer TIER II designs. At the same time, the rally that has been noted in the secondhand market has also helped boost appetite amongst ship owners, with the price gap between a modern vessel and a newbuilding closing fast and given that newbuilding prices are likely to climb over the next couple of months, many may well be placing these orders on speculation of an opportunity to flip them as resales at a later date and net the positive difference that they feel will be at hand. At the same time, shipbuilders have come out to market with a more aggressive marketing run, now looking to entice any potential buyers, while sentiment is high. This however is still mainly limited to Chinese shipbuilders, with S. Korean yards still out of play due to their requirements for higher prices and Japanese yards seemingly well occupied up until early 2020”, Allied said.

In a separate newbuilding note, Clarkson Platou Hellas said that “this week in Tankers, DSD Shipping have extended their series of 50,000 DWT MR Tankers at Hyundai Vinashin by declaring an option for two additional units. Set for delivery in 2020, the duo will be the 3rd and 4th vessels in the series. Whilst there is nothing to report in other sectors, there are a couple in the Passenger / Cruise market. Fincantieri have announced an order for one 40,700 GT Cruise Ship by Silversea Cruises. Delivering in 2020, the vessel will be able to accommodate 596 passengers. VARD have won an order for one approx. 5,000 GT Cruise Ship from Coral Expeditions for delivery in 1Q 2019. This single unit will be built at VARD’s Vung Tau facility in Vietnam and will be able to carry 120 passengers”.

In a separate note, Allied Shipbroking said that “on the dry bulk side, things seemed to have eased slightly though not necessarily due to lack of interest. Activity this week mainly revolved around the Panamax and Supramax sizes, with prices now showing further gains as competition amongst buyers heats up further. Sellers are seemingly a bit reluctant to act quick in this market, feeling that better numbers will be seen in the next couple of months and choosing as such to take a “ wait and see” strategy for now. Given that there seems to still be positive wind to be felt in the freight market and with the recent rally in rates only just getting started, things should get more busy over the next couple of weeks. On the tanker side, there was some slight improvement in activity to be seen with deals being noted in the VL and Suezmax space as well. Prices are still lingering at relatively low levels, while the lack of confidence that has been spilling over from the freight market has heavily effected sale & purchase activity for some time now”, the shipbroker concluded.

This news is a total 975 time has been read
Tags: Newbuilding orders keep coming as buying appetite continues to be firm