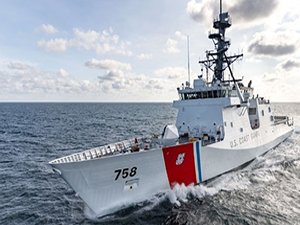 The US Coast Guard's newest vessel, the national security cutter Stone, recently completed sea trials in the Gulf of Mexico.

Being built at Ingalls Shipbuilding in Pascagoula, Mississippi, the Stone is the ninth in the class which is currently planned to have a total of 11 vessels.

The largest and most technologically advanced of the Coast Guard’s cutters, the newest class, the NSC program, replaces the aging 378-foot high endurance cutters, which have been in service since the 1960s.

Compared to legacy cutters, the NSCs’ design provides better sea-keeping and higher sustained transit speeds, greater endurance and range, and the ability to launch and recover small boats from astern, as well as aviation support facilities and a flight deck for helicopters and unmanned aerial vehicles.

The keel for the ninth cutter was laid in September of 2018 and she was launched on October 4, 2019. During the trials, the Stone spent three days in the Gulf of Mexico testing propulsion and auxiliary equipment, as well as her shipboard systems.

She is due to be delivered to the US Coast Guard before the end of the year. Because of the unique circumstances of conducting sea trials during the pandemic, extra precautions were required.

The number of shipboard riders for the trials was reduced by one-third to allow for adequate social distancing. Those on board were also tested for COVID-19 one week before sailing and were screened the morning of departure.

Masks were required at all times while onboard. “Every successful sea trial is a major accomplishment for our shipbuilders, but this set proved to be a particularly substantial undertaking,” said Jay Boyd, Ingalls’ NSC program manager.

“Since the year began, our team has persevered through every challenge. Learning through each obstacle presented by the COVID-19 pandemic, the NSC team has worked tirelessly to ensure the Coast Guard receives another high-performance cutter to help protect our nation.”

The new cutter is named in honor of Coast Guard officer Commander Elmer “Archie” Fowler Stone. He graduated in 1913 from the Revenue Cutter School of Instruction, (now known as the Coast Guard Academy), and received training at Navy Aeronautics Station Pensacola starting in 1916.

Three years later, in 1919, while the Coast Guard was under the Navy Department during World War I, Stone served as pilot of the NC-4 that made the historic first transatlantic flight. He was part of a crew of four that flew the historic mission and he received the Navy Cross. In 1934, Stone broke the world speed record for amphibian planes.

Tragically, Stone died just two years later of a heart attack while still on active duty. He was buried at Arlington National Cemetery.