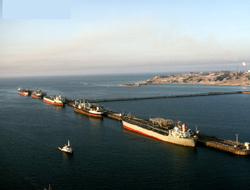 The cost of delivering Middle East crude to Asia may decline further as newly built tankers joining the global fleet trade at a discount to existing vessels.

The cost of delivering Middle East crude to Asia may decline further as newly built tankers joining the global fleet trade at a discount to existing vessels.

The cost of delivering Middle East crude to Asia, at the lowest in at least 11 years, may decline further as newly built tankers joining the global fleet trade at a discount to existing vessels. The fleet of very large crude carriers, or VLCCs, will expand by 11 percent this year, Drewry Shipping Consultants Ltd. said in a report today. The figure excludes assumptions about scrapping. New ships may lack permission to dock at some ports and some oil companies decline to hire them until they"ve inspected them, spurring owners to rent them at lower rates.

?There have been some discounts given by owners of new buildings,? Mathieu Philippe, a tanker broker in Dubai for Barry Roliano Salles, said by phone today. ?Another month or two and people will start realizing there is no sense taking these cargoes at this price.?

The London-based Baltic Exchange"s benchmark rate for Saudi Arabian oil shipments to Japan fell 5.1 percent to 25.81 Worldscale points yesterday. That"s the lowest since at least 1998 and equates to $7,490 a day. Frontline Ltd., the largest owner of the vessels, said Feb. 26 it needs $32,100 a day to break even on each of its supertankers.

Tanker rates have plunged as an economic slump curbs demand for oil. Crude has dropped 56 percent in the past 12 months and the Organization of Petroleum Exporting Countries responded by agreeing to cut output three times since September. The group produces about 40 percent of the world"s oil.

There are 40 percent more VLCCs for hire over the next 30 days than there are cargoes, according to the median estimate of two owners, five brokers, one derivatives broker and one trader surveyed by Bloomberg yesterday. The oversupply was 30 percent on April 6.

Frontline"s breakeven is the rate covering running costs for each ship, interest and scheduled loan repayments and corporate overheads. It doesn"t need to earn $32,100 from vessels hauling single-voyage cargoes to breakeven because it also has ships leased on longer-term, fixed-rate rents and better returns, Inger Klemp, chief financial officer of the company"s management unit, said March 11.

This news is a total 3239 time has been read