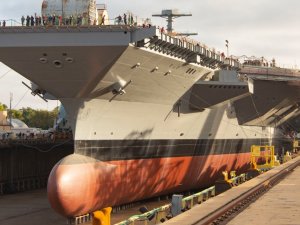 The USS John F. Kennedy, CVN 79, the second of the new Ford-class aircraft carriers, will be christened Dec. 7 by Caroline Kennedy in Newport News, Va.

Caroline Kennedy, President John F. Kennedy's daughter and sponsor of his namesake ship, will smash a bottle of American sparkling wine across the ship's hull on Saturday, Dec. 7, to christen the aircraft carrier.The Ford-class carriers – the Ford, Kennedy, the Enterprise, and the as-yet-unnamed CVN-81 – are or will be equipped with new technology the Navy believes will keep them effective for decades to come. The Ford’s first sailors, with months or even years of hands-on experience with that tech, were “creating … basically instructions on how to operate this ship with its systems and its new design,” as one sailor put it.

The ship is designed to save the Navy $4 billion in total ownership cost over its expected 50-year lifespan, with fewer overall components, an extended future drydock interval and ship-wide air conditioning. The 1,106-feet long ship can accommodate 90 combat aircraft at one time.

The nuclear-powered ship, the second in the Gerald R. Ford-class of aircraft carriers, is expected to be formally commissioned to enter U.S. Navy service in 2020. The 1,092ft-long Ford-class carriers will replace the Nimitz-class models. The vessels can operate up to 90 aircraft and feature a redesigned island, electromagnetic catapults and an enhanced flight deck.