Newport will be aboon to economy 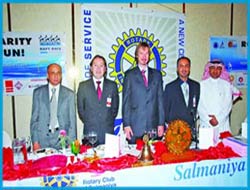 Bahrain’s new Khalifa bin Salman port will be a gateway for the northern Gulf and play a major role in boosting the Kingdom’s growing economy when it begins operations towards the end of 2008.

New port will be a boon to economy

Bahrain’s new Khalifa bin Salman port will be a gateway for the northern Gulf and play a major role in boosting the Kingdom’s growing economy when it begins operations towards the end of 2008.

That was the message yesterday from Iain Rawlinson, General Manager, Sales and Marketing for port managers APM Terminals Bahrain.

He was speaking at a packed weekly meeting of the Rotary Club of Salmaniya at the Golden Tulip Hotel on the theme: ‘Creating an alternative Shipping Hub for the Upper Gulf’.

He said the new port could put Bahrain back as the kind of leading port hub it had been in the past, though he admitted it would never compete directly with Dubai’s massive Jebel Ali development.

But it could attract giant container ships that currently off load at Jebel Ali with cargoes for the northern Gulf as the cost of the two-day trip would be offset by the higher cost of transshipping in the south once the port was up and running.

And he pointed out that across the world the shipping industry was growing at 15 per cent annually, faster than port expansion and that would also create new demand.

He said: “In the 1980s Bahrain was the centre of the Gulf in Finance, business, telecommunications and oil until Dubai took off. The new port can put bahrain back on the map as a major trading hub.”

He said that with Khalifa Bin Salam port beside an freezone and business area and close to the international airport it could make Bahrain a gateway for business with from Qatar to Iraq, Northern Iran, Kuwait and Saudi.
This would not only be a major boost for the Kindom’s existing economy but could attract other international companies to use Bahrain as a regional hub.

Raed Mahmood Al Samahjii, current President of the Rotary Club of Salmaniya and Managing Director of Universal Trading, thank Mr Rawlinson for his talk and pointed out that it was an example of how Rotary not only played a major role in raising money for charity but was also an important forum for members to hear of business developments across the Kingdom.

This news is a total 1563 time has been read