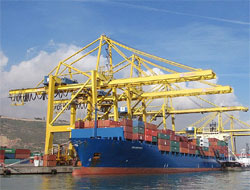 Drivers of change in the transport system fit within six major categories, which are policy, demography & society, energy & environment, technology, economics and finance, a professor at the Hofstra University in New York says.

Drivers of change in the transport system fit within six major categories, which are policy, demography & society, energy & environment, technology, economics and finance, a professor at the Hofstra University in New York says.

In a paper titled "Maritime transportation: drivers for the shipping and port industries," delivered at the International Transport Forum 2010 recently, Prof. Jean-Paul Rodrigue said each of them plays a role individually and in conjunction.

It is therefore virtually impossible to establish outcomes accurately as there are too many inter-relationships and uncertainties, particularly if a longertime frame is considered. It is however, possible to identify trends that may impact each driver individually and try to assess how these trends will shape different components of the transport system, he said.

The inherent scale and complexity of transportation systems, particularly when they span multiple jurisdictions, will require novel approaches in governance. The role and impact of governmeht policy is commonly subject to cycles of increasing commitments followed by different forms of retrenchment (e.g. privatization) as regulations lead to unproductive practices and unintended consequences. In spite of deregulation, transportation is subject to many forms of regulations pertaining to safety, security and the environment. These regulations as well as the taxation of transport activities, add to the management complexity and the cost burden.

Population growth is expected to endure in many parts of the world until the mid 21st Century, a process which will be linked with demands in mobility and increased levels of consumption. Yet, in other parts of the world, such and in Western Europe, North America and Japan, the rapid aging of the population and more people in retirement age will be associated with changes in mobility and lower levels of consumption per capita.

Issues related to the availability of energy and raw materials, particularly fossil fuels, are likely to endure and become more acute. This will be reflected in higher energy prices, and, since each mode has a different elasticity, the comparative advantages of modal options will change towards the most energy efficient transport chains.

Technological innovation is a very difficult process to anticipate and its impacts even more complex to assess. For transportation, technological innovations either concern the management, the mode (or infrastructure) or the motion (engine). It is expected that information technologies (IT) are likely to transform mobility with an improved command of flows and supply chain management practices. This is commonly linked with a better utilization of existing assets and derived productivity gains.

Economic growth and global trade have been significant vectors for the growth of mobility. Yet this process is subject to cycles of growth and recession and limits in credit based consumption. The level of activity and the structure of national economies, as well as their trade patterns, are an important influence on national and global transport systems. Economic integration is likely to endure, which will favor more comprehensive and seamless regional transport systems. The relative price of transportation is also linked with the viability of several supply chains and the comparative advantages they extract value from. As transportation costs are expected to rise on the medium term, namely due to fossil fuels, transport demand will be readjusted accordingly in volume but also in location.

Transportation projects, due to their size and technological complexity, are getting increasingly capital intensive. In several cases, only the largest financial institutions, often in partnership with the public sector, can provide an adequate level of capitalization. The value of transportation assets and the revenue they generate are likely to be important factors behind their financing.

He said that among the drivers that are most likely to impact the shipping industry in the future are security issues, real estate pressures around terminal facilities, economies of scale, environmental concerns, particularly at ports, the integration of information technologies, progress in terminal automation and finding capital for financing.

Since the industry is predominantly private, oligopolistic with multinational assets, the realms of engagement for public policy are more limited than for other modes. However, since many stakeholders are concerned with the development of a more efficient maritime/land interface through hinterland transportation, this trend presents new realms of engagement for public policy, he concluded.

This news is a total 9930 time has been read