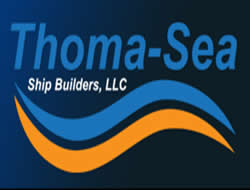 Thoma-Sea Shipbuilders of Lockport has won a $7.3 million U.S. Navy contract to build a survey vessel for the government of Oman.

Thoma-Sea Shipbuilders of Lockport has won a $7.3 million U.S. Navy contract to build a survey vessel for the government of Oman.

The boat company bid on the project in partnership with Technology Associates, a New Orleans design firm.

?The employees and management of Thoma-Sea and Technology Associates are excited that the U.S. Navy has placed their confidence in this team,? said Walter Thomasie, general manager, in a news release. ?We look forward to developing a long-term relationship with the Navy.?

The company did not respond to requests for comment about how long the vessel would take to build or how many workers it would keep busy.

The contract is part of the Navy"s Foreign Military Sales program, which sells military supplies and assets to foreign countries.

It"s the third local contract announced in the program. In March, Houma-based Gulf Island Fabrication landed an agreement as a subcontractor on a $70 million contract to build offshore-supply vessels that will be used by the Iraqi navy.

In April, Swiftships of Morgan City announced a $180 million contract to construct other Iraqi naval boats and $23 million agreement to train Iraqi sailors.

Many shipyards rely on government contracts to help stabilize their flow of work in between private industry projects, said Ken Wells, president of the Offshore Marine Service Association, which represents companies that build and operate vessels that bring supplies to offshore oil-and-gas rigs and platforms.

This news is a total 6800 time has been read