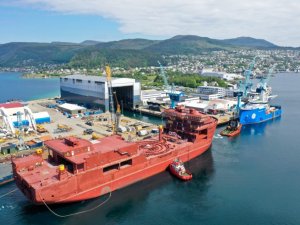 Cable laying vessel (CLV) Nexans Aurora has arrived at Ulstein Verft in Norway, where outfitting work will be carried out.

Nexans Aurora began its trip to Norway from the CRIST shipyard in Poland a few days ago.

The hull will now be towed into the dock hall at Ulstein Verft before activities such as outfitting, electrical work, insulation and piping commence.

Once delivered in 2021, Nexans Aurora will be able to perform power cable laying, including bundle laying, jointing and repair, and cable system protection and trenching.

This news is a total 1870 time has been read
Tags: Nexans Aurora , Ulstein Verft Awind secures Dogger Bank contract for CSOV newbuildThe contract will commence Q2 2023. The vessel will be used for commissioning of the 13 MW GE Renewable Energy Haliade-X turbines on the first two phases of the development, Dogger Bank A and Dogger Bank B, until completion in 2025.