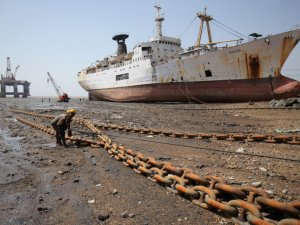 The NGO Shipbreaking Platform is accusing the shipping industry of using ‘scaremonger’ tactics and ‘fake news’ in order to get South Asian shipbreaking yards included on a list of EU-approved ship recycling facilities.

According to the NGO Shipbreaking Platform, which promotes against the use of South Asia’s ‘beaching’ yards, the shipping industry is quick to lament that there will not be enough recycling capacity and that there will be too few options for them under the EU List of approved recycling facilities following the recent decision by the Chinese government to stop the import of end-of-life ships for scrap.

Under the EU Ship Recycling Regulation adopted in 2013, starting in 2019 all end-of-life ships flying an EU Member State flag will be required use an approved shipyard included in a so-called European List of ship recycling facilities. Yards included on the list get exclusive access to all EU-flag ships being sent for scrap.

The European Commission published an initial version of the list in 2016, listing 18 shipyards all located in European Union.

The Commission has been under pressure from the shipping industry to open the list to foreign yards as soon as possible, with the shipping that there is not enough capacity in the EU to keep pace with demand. In fact, one estimate from the European Community Shipowners’ Association estimated that yards included on the list have the capacity to handle less than 30% of the EU’s own ship recycling target.

NGO Shipbreaking Platform: 80% of Tonnage Sold for Scrap in 2017 Ended Up on South Asia’s Beaches

While the Commission has received applications from foreign yards in countries Turkey, China, and even India, a final decision on whether the List will be opened to foreign yards upon the Ship Recycling Regulation’s entry into force has not yet been made.

As the regulation stands now, Indian yards in particular that have applied can’t be included as they do not comply with the human safety and environmental requirements of the regulation as long as ships are still being broken up on beaches.

“The industry claims that the standard set by the EU must be lowered so that beaching yards can be approved,” the NGO Shipbreaking Platform said this week.

According to the Platform, foreign yards don’t need to be on the list because there is actually sufficient capacity on the list to recycle the entire EU-flagged fleet at end-of-life.

The Platform calculates that the 21 facilities currently on the EU List as of May 2018 have the capacity to recycle at least 1 mill LDT, more than enough capacity to handle the less than 500.000 LDTs of applicable tonnage that was scrapped in 2017. The Platform further notes that while most can only take in smaller vessels, at least 10 of the facilities on the list are able to take in larger ones. Plus, the addition of more yards in Italy and Norway will help boost capacity even more by the end of the year.

“The overall capacity and sizes of all the facilities that are compliant with EU law will easily accommodate the recycling needs of EU-flagged ships by 1 January 2019. The scaremongering of the shipping industry therefore needs to be debunked, and the European Commission should not bow-down to the “fake news” spread by the ship owners,” the NGO Shipbreaking Platform said in a strongly-worded press release.

“The EU should aim at ensuring that the European shipping industry no longer causes harm to the environment and workers on the South Asian beaches. 30 percent of end-of-life ships are owned by European companies – compared to only six percent registered under an EU flag. There will be a need to support the expansion of existing or building of new facilities to ensure the clean and safe recycling of the many larger vessels that are owned by European companies”, says Ingvild Jenssen, Director of the NGO Shipbreaking Platform.

The NGO Shipbreaking Platform, created in 2005, is coalition of environmental, human and labour rights organizations whose goal is to prevent toxic end-of-life ships from being beached in developing countries, particularly in South Asia where ships are dismantled within the tidal zone.

“Circular economy is the buzz-word and a return scheme for ships is the solution”, Jenssen adds.