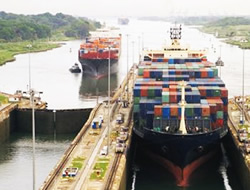 December 2014 is confirmed as the start of the Interoceanic Canal of Nicaragua construction works, with the completion of the project scheduled for 2019.
“Construction of the great canal is scheduled to get underway in December. Logically, the first thing will be its ports, which have been a need and aspiration of Nicaragua’s,” said Talavera, a member of the Grand Canal Commission told the EFE news agency.
The works on the Interoceanic Canal of Nicuaragua, also known as Nicaragua Grand Canal, will begin at the mouth of the Brito River in the Rivas department.
The USD 40 billion project includes two ports, an airport, an artificial lake, two locks, a free trade zone, tourist facilities, roadways and cement factories. The Nicaragua Grand Canal will be three times longer than the Panama Canal, with the ability to accommodate ships up to 400,000 tonnes.
Environmentalists and certain Nicaraguan politicians have expressed their concerns with the project, questioning the Canal’s impact on the environment, as well as the lack of experience of its Chinese developer, Hong Kong-based HKND Group, with large infrastructure projects.
http://turkishmaritime.com.tr
This news is a total 5113 time has been read