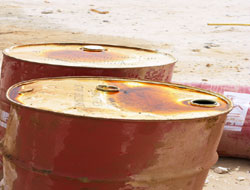 Nigeria will reduce crude oil export volumes by 5 percent in November and December due to OPEC's production cut, its state oil firm said on Thursday.

Nigeria to trim oil exports by 5 percent due OPEC cuts

Nigeria will reduce crude oil export volumes by 5 percent in November and December due to OPEC's production cut, its state oil firm said on Thursday.

"As a result of the production cut announced by OPEC, Nigerian cargoes in November and December 2008 lifting programs are hereby reduced by 5 percent," the Nigerian National Petroleum Corp. (NNPC) said in a statement.

NNPC said customers and operators would be advised on cancellation at the affected terminal. It did not specify the cargoes to be canceled in the statement.

The cut might amount to about 100,000 barrels per day. Nigeria exports about 1.8-2 million barrels of crude oil daily.

Nigerian exports have, however, been erratic, with lifters experiencing many delays and cancellations to cargo loadings due to militant sabotage of facilities in its restive Niger Delta.

The Organization of the Petroleum Export Countries (OPEC), which accounts for about a third of global crude oil supplies, agreed last Friday to slash production levels by 1.5 million barrels per day as oil prices have fallen by more than 50 percent from record highs above $147 a barrel hit in July.

Benchmark U.S. crude oil futures were trading around $68 on Thursday.

Earlier this week, Abu Dhabi National Oil Co (ADNOC), the state-run firm for the UAE's key oil producer Abu Dhabi, said it would reduce its November and December export volumes by 5-15 percent depending on crude oil grades such as Murban.

Many traders had suspected the agreed OPEC cuts would come mainly from OPEC kingpin Saudi Arabia, the world's top oil producer, which said at the OPEC meeting in Vienna last week that it would reduce its output by 466,000 bpd.

Saudi Arabia has not yet notified its customers of supply allocations after the meeting. Term customers expect to receive notifications from the kingdom next week.

This news is a total 1622 time has been read