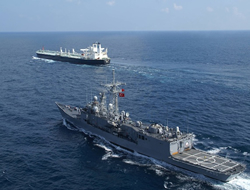 Maritime piracy in West Africa is not exactly a burgeoning crisis. Armed militants on fast-moving skiffs have terrorized commercial shipping in the Gulf of Guinea for well over a decade.

Robbing crews, stealing cargo and demanding ransom payments for the safe release of mariners. But the October attack on a US-flagged oil industry vessel and the abduction of two Americans has turned international attention from Somalia to Nigeria

.Nigerian piracy is not Somali piracy. Maritime insecurity in East and West Africa are the consequences of distinct socioeconomic circumstances and have differing geopolitical ramifications. Recognizing that there is not a one-size-fits-all response to curbing the problem is a critical step in generating workable and effective solutions.

The following are eight differences between Nigerian and Somali piracy that every mariner, policymaker, journalist and armchair analyst should know:

1. Nigeria is not a failed state.By any measure, Somalia is a disaster. Decades of political and social dysfunction have left Somalia without a functioning government or economy. Comparatively, Nigeria is by no means a failed state. The country is resource-rich and has a functioning democratic system. Unlike Somalia, Nigeria has a small, yet capable navy. Since 2004, Nigeria’s naval forces have conducted joint operations with regional and global partners to curb piracy and degrade criminal elements in its eastern waterways. However, Nigeria still struggles to maintain a monopoly of force in rural regions like the Niger Delta. Its piracy problem is a product of flourishing organized crime and a shortage of resources to police the 853 miles of coastline and inland littoral areas.

2. Nigerian piracy disrupts the global energy market.Somali pirates that prowl the waters off of the Horn of Africa disrupt the flow of goods and commodities through one of the world’s most important trade gateways. The expenses of evasive shipping routes, higher insurance premiums and additional security measures cost the global economy billions every year. But unlike the Horn of Africa, West Africa is home to a major global energy market. Five-point-four million barrels of oil flow through the Gulf of Guinea every day, making up 30% of the US oil market and 40% of Europe’s. Nigerian pirates and bunkerers steal an average of 100,000 barrels of oil per day, driving up global energy prices and costing the Nigerian government $12 billion in annual oil revenue. Somalis may disrupt the free flow of commerce through some of the world’s most important trade routes, but the Nigerian problem directly degrades global oil supplies and undermines a critical piece of the world’s energy market.

3. Nigerian piracy is an extension of the Niger Delta’s onshore criminal enterprise.Like Somalia’s pirates, Nigeria’s raiders are young, impoverished men whose opportunities are scarce and outlooks are bleak. From regions where legitimate means of employment are absent, they take to the sea looking to get rich quick. But unlike Somalis, the Delta’s disillusioned citizens are explicit in their grievances against both oil companies and their own government. Poverty, oil pollution, perceived discriminatory employment practices, and socioeconomic and political marginalization have driven thousands of Niger Delta rebels to organize, arm and extend their political agendas offshore. The Movement for the Emancipation of the Niger Delta (MEND) is the region’s most organized and heavily armed rebel faction. Motivated by greed and grievance, the MEND criminal enterprise disrupts Nigeria’s on and offshore commercial environments. The group has been the most active in maritime crime since its inception in 2006, but the group also runs an extensive organized crime network in the Delta, to include large-scale oil theft, pipeline vandalism and illegal refining operations

.4. MEND’s influence has gone international.Somali pirates have an impressive range of operations, attacking ships at distances of up to 1,000 NM offshore in the Indian Ocean. But Somalia’s onshore contingent is limited to the pirate villages and command and control sites within its borders. Comparatively, Nigeria’s onshore contingent has gone international. MEND operations have spread south to Cameroon and the Bakassi Peninsula, networks have taken root in Benin and Equatorial Guinea, and resource conflicts have spread to Angola’s Cabinda region. Meanwhile, the group has expanded offshore operations to neighboring territorial waters in search of easy and lucrative targets. Compared to Somalis, Nigerian pirates do not have to go far to find targets like oil tankers or support ships. But in response to improved force protection measures, Nigerian pirates are extending operating ranges by hijacking fishing vessels in Nigerian waters, and then using the vessels to launch attacks off the coast of neighboring Cameroon and Benin.

5. Nigerians are fishermen. Somalis are not.The narrative that overfishing and commercial poaching have driven Somalis to piracy is a storyline that has won sympathy from the international community. But Somalis disdain fish and fishing. Well-to-do Somalis eat camel. Others eat goat, sheep and cattle. The poor eat chicken and vegetables. Fish is a last resort. There has never been a significant fishing industry in country because there is no demand for fish.This is not the case for Nigerians. Fishing is the second-largest industry in Nigeria next to oil. Over the last decade, the aggregation of environmental damage from oil spills and maritime piracy has decimated the country’s fishing economy. If spills from vandalized pipelines and rotting infrastructure weren’t enough to keep fishermen in port, the frequency of attacks on fishing vessels has caused many trawlers to sit idle. Seafood prices in Nigeria have skyrocketed because of the scarcity of fish, putting an important protein source out of reach for many ordinary Nigerians. The billions of dollars lost by the fishing industry has put tens of thousands of Nigerians out of work, adding strain to an already bleak employment picture where alternative livelihoods are very much absent.

6. Nigerian pirates don’t have to go far to stay in business.Somali pirates terrorize shipping as far east as India and as far south as Mozambique. Nigerian pirates do not stray hundreds of miles into the Gulf of Guinea because they don’t need to. With slow moving tankers, offshore oil infrastructure and a heavy logistics footprint, Nigeria’s oil industry provides fertile hunting grounds close to shore. The most pirate-infested waters are in the vicinity of Lagos, Nigeria’s economic capital, and the oil-rich waters of the southern Niger Delta near Port Harcourt. Furthermore, Nigeria’s pirates do not limit themselves to floating targets. Attacks on coastal villages and along inland creeks are convenient and low-risk endeavors for groups like MEND, whose proximate safe havens in the Delta allow for easy access to coastal infrastructure.

7. Motive and money trail.Somali piracy is a crime of opportunity where other opportunities are unavailable. Players at various socioeconomic levels have a stake in upholding the piracy system. Many operations are start-ups initiated by gangs or criminal outfits. They begin by hiring a logistics person, drawing a business plan, raising cash through investors and hiring a labor force. Societal buy-ins on operations are commonplace, where locals become shareholders in the enterprise. Some Somalis only invest a few hundred dollars and look to collect dividends on ransom payments. Other investors, like wealthy members of the Somali diaspora, have been known to shell out hundreds of thousands of dollars to fund operations. These diaspora shareholders are the big winners in instances of large ransom payouts.Conflict and crime in the Niger Delta has one common denominator: oil. The economics of Nigerian piracy are inseparable from the lucrative and fiercely sought-after global commodity. There are perhaps isolated incidents of societal buy-ins, dividend payments and diaspora investors, but Nigerian piracy is not a social welfare arrangement backed by a large community of local stakeholders. Preying on oil industry personnel and assets is instead a nefarious demonstration of the Nigerian entrepreneurial spirit. Offshore thefts and kidnappings are attempts by factions to acquire what they consider their rightful share of the Delta’s oil wealth.Is Nigerian piracy an entirely criminal enterprise? Is it fueled by inequality and social injustice? Or is it part of a corruption scheme to extort money from oil companies? The answer is probably a little of all three. However, the lack of transparency in the financial system means an inability to track the pirate money trail. Without knowing exactly who is involved or how money moves, the answer to the crime, social justice or corruption question is left to speculation.

8. Piracy is still legal in Nigeria… Or at least not yet illegal.In response to the Somali piracy problem, the international community has mounted a 29-nation naval task force to shut down piracy operations. In the absence of a Somali judicial system, a coalition of countries has stepped in to resolve the problem of where to try suspected pirates, and where to incarcerate those convicted. With monetary assistance from the West, the Seychelles has constructed a small prison and Kenyan courts have been willing to both try and imprison Somali pirates. In contrast to the multinational response to the lawlessness onshore in Somalia and in the Gulf of Aden, there is no space for coalition intervention in the Nigerian justice system. Despite having a sizeable navy and functioning judicial system, Nigeria has failed to incorporate the United Nations Convention on Law of the Sea (UNCLOS) or to implement piracy laws of its own.

Tough there are calls to domesticate international conventions on piracy, the complete absence of laws governing the safety of marine navigation explains the nonexistent prosecution rate in Nigeria. Until there are legal consequences to pilfering ships and abducting crews, the risk-to-reward ratio will remain favorable for Nigeria’s pirates.

This news is a total 2950 time has been read