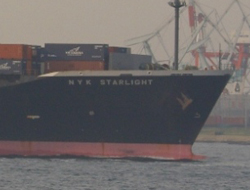 An elderly port worker has died after being hit by a container and thrown into the water from an NYK Line ship in the US.

An elderly port worker has died after being hit by a container and thrown into the water from an NYK Line ship in the US.

Workers at the Port of Oakland, California reportedly downed tools after the incident late on Saturday night.

Seventy seven-year-old Delmont Blakeney was unloading containers from the 2,850-teu NYK Starlight on Saturday when he apparently noticed a problem with the locking device on one box.

On going to inspect it the device reportedly came loose and the container struck the Oakland resident, crushing him against the Panama-flagged ship"s rail before tossing him overboard.

Desperate colleagues tossed Blakeney a life jacket but he was unconscious in the water. They were unable to locate a ladder onboard to lower down to the water to reach him.

It took half an hour for the port worker to be dragged to shore from where he was rushed to hospital and pronounced dead on arrival.

Angry dock workers are said to have stayed away from the port on Sunday in protest at alleged unsafe work practices. It is unclear if they intend to return to work on Monday.

The 1991-built ship is NK-classed and has P&I cover with the UK Club.

This news is a total 1522 time has been read