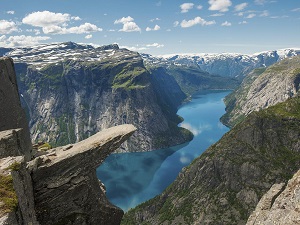 The Norwegian Maritime Authority (NMA) has proposed even stricter regulations to reduce the environmental strain in the world heritage fjords.

As informed, the proposed amendments were circulated for review on October 31, with six-week deadline for comments. In June this year, the NMA circulated for review new legislation for reduced emissions and discharges and a cleaner environment in the Nærøyfjord, Aurlandsfjord, Geirangerfjord, Sunnylvsfjord and Tafjord.

“The Government wishes to reduce the emissions and discharges from cruise ships. Stricter requirements for ships in the world heritage fjords would be a step in the right direction,” Ola Elvestuen, Minister of Climate and Environment, commented.

Now, the NMA is proposing that fuel being used on ships in the world heritage fjords must have a sulphur content of maximum 0.1% by weight. Additionally, a prohibition against the use of exhaust gas cleaning systems in these areas is being proposed, including both open, closed and hybrid systems.

“Experience shows that today’s cleaning systems emit visible smoke emissions, and some systems also generate discharges to sea. Even if the visible smoke is partly water vapour, it has a negative impact on people’s experiences of our world heritage fjords,” Bjørn Pedersen, Head of Department of Legislation and International Relations in the NMA, explained.

The NMA is also proposing a prohibition against incineration of waste on board ships in the world heritage fjords, which will contribute to reducing the visible smoke emissions. “We have a particular responsibility for taking care of the fjords inscribed on UNESCO’s World Heritage List,” says Pedersen.

The new proposal also lays down the possibility of exemption from the Tier I NOx requirements to be met by 2020 for ships that can document that they will satisfy the strictest NOx requirements (Tier III) by 2022, i.e. three years before the deadline.

This news is a total 2102 time has been read
Tags: nma, norwegian maritime authority, environment, fjords, minister of climate and environment