No buyers for Scottish submarine 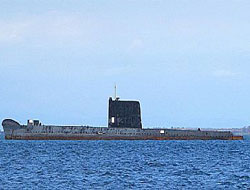 No buyers were found for Hmas Otama, built at Scott's of Greenock in the seventies.

No buyers were found for Hmas Otama, built at Scott's of Greenock in the seventies.

Scottish-built submarine HMAS OTAMA was put up for sale on Ebay at a fixed price of $4.9 m (AUS).

No buyers were found for the boat, built at Scott's of Greenock in the seventies.

Max Bryant, West Port Oberon Association president told ABC that although there were no sale made through the online channel, he still expects the sub to stay in Australian waters,

"The expressions of interest are from Werribee, from St Kilda Marina, from Frankston council and from Grafton and Bundaberg," he said.

HMAS OTAMA is 297 feet long and has a tonnage of 2186 tons. After six years lay up she is in a pretty poor state but nonetheless, she is a complete submarine with all of her original features intact. A piece of Australian naval, and Scottish shipbuilding, history.

She was launched on the 3rd December 1975 at the Scottish shipyard in Inverclyde by Princess Anne.

The boat was withdrawn from service in 2000 and is the last of the famous Oberon class. She arrived at Western Port Bay in 2002.

This news is a total 681 time has been read