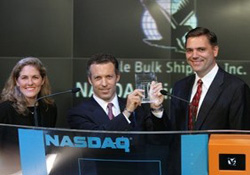 However, the situation could change rapidly, and Mr Zoullas unveiled a plan designed to position his company to pounce at the right time.

Eagle Bulk has forged an alliance with Delphin Shipping, an arm of private equity group Kelso, to target ?exciting purchase opportunities?. The alliance would build on Eagle Bulk"s office presence in China and Japan, and its strong operational base in New York.

News of the alliance came as Eagle Bulk revealed a subtle switch in its chartering strategy. The company, which derives all its income through period charters, has formalised a practice of renewing expiring contracts for a year as opposed to its original practice of signing three- to 10-year charters during the 2007 boom.

Last week the company employed two vessels at a modest $13,000 a day for one year.

Eagle Bulk chief financial officer Alan Ginsberg said that in an improving dry bulk market, ships that come up for charter renewal were ?far more valuable? closer to the date of renewal.

?We are in that kind of market right now,? he said.

Separately, Eagle Bulk revealed that it had engineered a revamp of its credit facility at the start of the third quarter, which the company said strengthens its balance sheet and affords it more flexibility to bankroll its substantial newbuilding programme.

The supramax specialist said the collateral covenants on its revolving credit facility, hitherto based on the ships" market values, would now be computed based on vessel book values until the dry bulk market remains in the doldrums.

?Collateral covenants will revert to vessel market values only when the dry bulk market recovers,? the company said, without providing any details.

By way of concession to lenders, Eagle Bulk has agreed an interest rate of 2.5% over the London interbank offered rate. The non-amortising revolving credit facility has been reduced from $1.4bn to $1.2bn, with maturity moved forward to 2014 from 2017.

Eagle Bulk has pledged to use half the net proceeds from any fresh equity issuance to repay debt and reduce the facility.

The company last month completed a $100m follow-on issue that increased its outstanding shares from 47m to 62m, and analysts have already predicted more share sales this year as the company seeks to stay within covenants.

Analysts were encouraged by the news. Dahlman Rose managing director and head of research Omar Nokta retained a "Buy" rating on the stock, on expectations that supramax vessel values, which rose 13% in the last three months, would gain a further 20% in the coming months.

Mr Zoullas added that the rejig and a cash position of $142m as of June 30 ?will ensure we execute responsibly on our corporate growth initiatives?.

The developments came as Eagle Bulk announced a second-quarter net profit of $13.3m, as against $14.9m a year ago. Revenues were $53m in the second quarter this year, compared with $37.2m last year.

This news is a total 5770 time has been read