No further detail were available 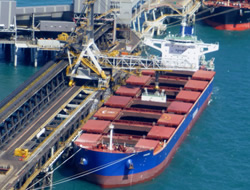 A vessel owned by Indias Essar Shipping carrying iron ore bound for China was arrested in Singapore on Sunday due to a dispute with a bunker fuel supplier, according to sources and the city-states Supreme Court website.

The 106,438-deadweight tonne vessel Kishore, which was on its way to China from Brazil, was arrested by the Supreme Court sheriff because of a dispute with Singapore-based Bunker House Petroleum, two sources said.

Bunker House Petroleum and Singapore’s Maritime and Port Authority declined to comment.An Essar Shipping source said Kishore “should sail out today”. Ships carrying iron ore from Brazil and headed for China typically stop in Singapore to refuel. Kishore loaded iron ore at the Brazilian ports of Itaguai and Sepetiba Bay on Oct. 11 and reached Singapore on Nov. 17, according to Reuters shipping tracking data.

This news is a total 1255 time has been read