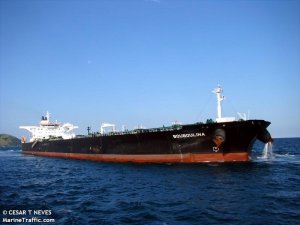 The manager of an oil tanker being probed by Brazilian authorities in connection with an oil spill off the country’s coast has found “no proof” of the vessel conducting activities that may have led to leaks on a journey between Venezuela and Malaysia.

In a statement sent to Reuters on Saturday, Delta Tankers Ltd, who manages the Greek-flagged Bouboulina ship, said a full search of the material from the cameras and sensors that all their vessels carry revealed no evidence of the tanker “having stopped, conducted any kind of ship-to-ship operation, leaked, slowed down or veered off course, on its passage from Venezuela to Melaka, Malaysia.”

Delta Tankers reiterated the vessel sailed from Venezuela in laden condition on July 19, heading directly, with no stops at other ports, for Melaka, Malaysia, where the tanker discharged its entire cargo without any shortage.

Brazilian authorities on Friday claimed that a Greek-flagged ship carrying Venezuelan crude was the source of the crude oil tarring Brazil’s coastline over the past two months.

The Brazilians said the tanker appears to have spilled the crude about 700 km (420 miles) off Brazil’s coast around July 28-29, after loading the oil in Venezuela.

The prosecutors conducting the probe said they found strong evidence that the company, the captain and the vessel’s crew failed to communicate to authorities about the oil spill and or release of the crude oil in the Atlantic Ocean.

The contradicting accounts, along with the execution of police search warrants in Rio de Janeiro, brought a dramatic twist into the causes of the mysterious oil spill that has stained tropical beaches along 2,500 km of Brazil’s coast.

Brazil’s solicitor general said the country would seek damages in the case, which has hurt tourism and fishing communities in Brazil’s poorer northeast region.

On Saturday, Delta said cameras and sensors that all its vessels carry as part of their safety and environmental policies, monitor activity on board and alongside vessels, as well as course alternations, stoppages, and speed data.

The company said the material obtained from an analysis of its security equipment will be shared with Brazilian authorities when they contact the company regarding the investigation, adding that no such contact has been made.

Delta Tankers denied this, saying that a full search of the material from the cameras and sensors that all their vessels carry as part of their safety and environmental policies, revealed no proof that the Bouboulina could be responsible for the spill.

“There is no proof of the vessel having stopped, conducted any kind of STS operation (ship to ship), oil leaked/spilled, slowed down or veered off course, on its passage from Venezuela to Melaka, Malaysia,” the company said.

The company added that it would share its materials with Brazilian authorities, should they contact the company, noting that no contact had been made so far.

The oil spill, that is estimated to have taken place on July 28-29, affected 2,500 km of Brazil’s coastlines, hitting at least 120 locations in 77 municipalities. Brazil’s environmental agency IBAMA earlier stated that the substance was ‘crude oil’ of a type that is not produced in Brazil.

This news is a total 536 time has been read
Tags: brazil oil spill