No ransom for pirates 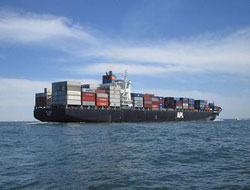 Somali pirates have agreed to release a Yemeni cargo ship without ransom after successful negotiations between the hijackers, local elders and a Yemeni official.

Somali pirates have agreed to release a Yemeni cargo ship without ransom after successful negotiations between the hijackers, local elders and a Yemeni official, a local official said Monday.

"No ransom was paid, but after negotiations, the pirates will get off the ship soon. The Yemeni ship will be released in the coming hours," Ali Abdi Aware, state minister of the northern province of Puntland told.

The MV Amani was seized on November 25.

This year's surge in piracy in the Gulf of Aden and Indian Ocean off Somalia has seen insurance costs rise, brought millions in ransoms, and sent navies rushing to the area.

Pirates are holding more than a dozen ships

In Kiev, Foreign Ministry spokesman Vasyl Kyrylych said talks to release a Ukrainian ship, the MV Faina, being held with 33 tanks on board, were nearing conclusion.

"We expect the liberation of the hostages very soon," the spokesman added, without giving any more details.

The pirates had been demanding $8 million as ransom.

Somalia's sea-gangs have taken advantage of chaos on the mainland to launch attacks offshore in some of the world's busiest shipping lanes connecting Asia and Europe.

A two-year Islamist-led insurgency against the government and its Ethiopian military allies has created a humanitarian crisis that aid workers say is one of the worst in the world.

The United Nations Monday appealed for nearly $920 million to fund aid projects during 2009 in the Horn of Africa country.

"The projection of those in need in Somalia is 3.2 million people, representing 40 percent of the total population," a U.N. statement said.

Aid workers have themselves been targeted this year. In the latest incident, residents said Islamists in the southern port of Kismayu arrested a Kenyan doctor and six Kenyan-Somali teachers. Two local aid workers were also arrested in Friday's sweep.

This news is a total 591 time has been read