No renegotiation with Hapag Lloyd 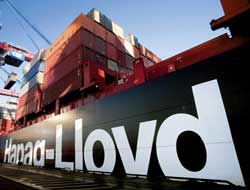 The New York-listed company confirmed yesterday that it did not participate in a rescue plan for CSAV, despite requests and concessions granted by most other owners with ships on charter to the Chilean line.

Seaspan, which has nine 4,250 teu ships on charter to Hapag-Lloyd, also disclosed that it had been asked by the cash-strapped German line to discuss amendments to contract terms.

?At this time, we do not intend to renegotiate the main terms of our charter parties with Hapag-Lloyd,? said chief executive Gerry Wang.

?If any of our charterers are unable to make charter payments to us in the future and are in default of their respective charter parties, we may not be able to recharter the relevant vessels at rates equal to the rates in our current charters or at all,? he elaborated.

Seaspan also revealed that the delivery dates on 11 ships the company has on order have been deferred for periods ranging from two to 15 months.

Furthermore, the company is also in discussion with a shipyard and charterer to delay delivery of another two vessels on order for around nine months.

The disclosures came as Seaspan reported net earnings for the latest quarter of $112.3m, compared with $85.3m for the comparable three months of 2008.

Normalised net earnings for the second quarter of $18.7m, down from $19.3m, included a $1.1m expense related to the exercise of a vessel delivery deferral.

For the six months ended June 30, CSAV represented 2.2% of Seaspan"s $133m revenue. Upon delivery of the two additional vessels, CSAV will account for 3% of approximately $7bn in total revenue expected from Seaspan"s fully delivered fleet of 68 vessels under their current time charters.

In line with other owners, Seaspan received requests from CSAV to participate in a restructuring plan and renegotiate the payment terms of time charters.

?We declined to participate in the restructuring plan,? said Seaspan.

?However, we are aware that since that time, CSAV has proceeded with its plan. To date, CSAV has made payments in accordance with the time charter for the CSAV Loncomilla and the CSAV Lumaco.?

So far, Hapag-Lloyd has also made payments in accordance with the time charters for the nine vessels chartered from Seaspan.

This news is a total 3632 time has been read