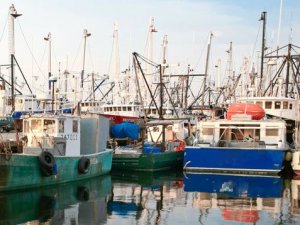 The National Oceanic and Atmospheric Administration is shuttering one of 19 groundfish quota sectors in New England over concerns that its managers are not enforcing conservation goals.

It is an unprecedented enforcement action, affecting 60 permit holders, 22 active vessels and 85 fishermen.

Many of these boats belong to the fleet of the "Codfather," the popular moniker for New Bedford fishing magnate Carlos Rafael, who was recently sentenced to four years in prison for falsifying catch records and smuggling money out of the country. Rafael was once the president of Northeast Fishery Sector Nine, the now-closed management district, and his daughter is currently an official with the organization. NOAA has asked the sector to produce evidence of improved enforcement before sanctions are lifted.

“They do need to make significant changes. And until they do, their boats will be tied to the dock,” said John Bullard, NOAA’s regional administrator, speaking to NPR. He says that it's hard to assess the full extent of the damages, but “they’ve exceeded quotas of cod, of yellowtail flounder and witch flounder by perhaps as much as a whole year’s quota.”

The boats will likely remain tied up for months, with serious repercussions for local suppliers, bunkerers, net sheds and other small businesses. In addition, Sector Nine's future quota could be reduced to compensate for past damage.

While the closure will have a negative effect on the sector's fishermen, officials with neighboring fisheries organizations expressed satisfaction with the outcome. “Fishing vessels throughout New England who have been doing things the right way out on the water have been hoping that NOAA will come down on this sector," said Ben Martens, the executive director of the Maine Coast Fishermen's Association, speaking to NEPR. Leaders of the New England Fishery Management Council and the Cape Cod Fishermen's Alliance also said that they supported NOAA's decision.

Carlos Rafael, a larger-than-life personality in the New England fisheries, is the owner of Carlos Seafood – one of the largest commercial fishing businesses in the U.S., with 32 vessels and 44 permits. He pled guilty in March to charges of tax evasion and falsifying federal records. It was not his first brush with the law: Rafael did four months for tax evasion in the 1980s and successfully fought off charges of price-fixing in the early 1990s, along with lesser altercations with regulators in recent years over his vessel operations.

Federal investigators charged that between 2012 and 2016, Rafael misreported about 780,000 pounds of fish, claiming that it was haddock or some other abundant species when it was actually quota-restricted cod or sole. He told investigators that he sold the fish to a New York wholesaler for duffle bags full of cash, which he would smuggle out of the U.S. to his country of birth, Portugal.

Rafael was sentenced to 46 months in prison and three years of probation, during which time he may not work in the fishing industry. He must also pay a fine of $200,000, plus restitution to the U.S. Treasury of $110,000.

“Mr. Rafael profited at the expense of other hard-working commercial fishermen by falsifying records so he could keep fishing while they were sidelined,” said Acting United States Attorney William D. Weinreb.  “He will now face the consequences of violating federal laws designed to sustain the New England fishery.”

This news is a total 859 time has been read
Tags: NOAA Shuts Down 22 Fishing Boats over "Codfather" Scandal