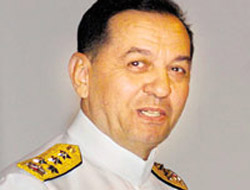 The parliamentary Human Rights Committee will be taking up recent allegations that some high-ranking military officials are "blacklisting" some ministers and deputies, that the TSK categorizes media organs according to their attitudes towards the TSK.

The parliamentary Human Rights Committee will be taking up recent allegations that some high-ranking military officials are "blacklisting" some ministers and deputies, that the Turkish Armed Forces (TSK) categorizes media organs according to their attitudes towards the TSK and that some generals in the TSK attempted to stage a coup in 2004.

The Human Rights Commission held its first meeting in nine months last week. The next meeting, where the military will be charged with these three claims of violating democratic principles, is scheduled for today. Faruk Ünsal, deputy chairman of the committee from the Justice and Development Party (AK Party) referred to the allegations as "scary and frightening," while the main opposition Republican People's Party's (CHP) Mesut De?er expressed his hope that such incidents would end in Turkey.

The first serious accusation concerning activities of the TSK occurring “outside the law” was a news story first printed in Zaman daily and documented by former politician Hasan Celal Güzel. According to the report, Former Gendarmerie Commander ?ener Eruygur had compiled a “blacklist” of ministers and parliament members.

Another charge, also disclosed by the media, documented that the military had classified members of the media into two groups depending on whether they had positive or negative opinions of the military. The most recent allegation was based on a diary that allegedly belonged to former Navy Commander Adm. Özden Örnek. The diary, the extensive excerpts of which were published in Nokta newsweekly’s latest issue, revealed that the military attempted twice to topple the AK Party government of Prime Minister Recep Tayyip Erdo?an, which came to power in 2002.

In its meeting today, the committee will be taking up the allegations of blacklisting directed at Cabinet members and journalists. Commenting on the allegations, Ünsal said the committee hoped to emphasize how wrong it is for individuals using the power of the people to engage in acts against the law.

He stressed that the nature of a crime and its punishment could only be decided within the framework of the judiciary in a state of law. Ünsal said any classification, categorization or restriction outside the law would be tantamount to the prevention of freedom of thought. Pointing out that the media blacklist prepared under the General Staff constituted a crime, Ünsal said: “We will take [the journalist classification] issue up as the assembly of the nation. I hope some things will change from now on.”

Commenting on the allegations that the military planned two coup attempts in 2004, Ünsal said, “This is absolutely unacceptable. We will discuss these in the committee. Still, judicial organs should most certainly investigate the validity of these claims and take the required legal action.”

Prime Minister Erdo?an on Tuesday had also called on Turkey’s prosecutors to investigate the reports of an alleged failed coup. Before flying to Syria on Tuesday, Erdo?an told reporters that prosecutors had started investigating the sources used in Nokta. “If they present documentation and evidence, the case should be followed up on from there.”

In a statement made on Wednesday, Nokta Editor in Chief Alper Görmü? said they were ready to submit all the evidence they had if any a prosecutor so demanded. “The prosecutors should both talk to the alleged owner of the diary and ask us what proof we have. We will most certainly give what we have,” Görmü? said.

Legal professionals who talked to Today’s Zaman, commenting on Adm. Örnek’s diary, said the Chief Prosecutor’s Office had to launch an investigation without any applications being filed. Former Chief Prosecutor of Yozgat Province Re?at Petek said a failed coup that didn’t go beyond an “attempt” would still constitute a crime under the law, which made it necessary for prosecutors to act according to the penal code. The former prosecutor said all prosecutors were responsible for investigating Nokta’s report, stating that it did not matter if the subject was civilian or military.

“The law has already granted the authority they need. The expressions of Özden [Örnek] Pasha have the quality of confessing a crime. There is a provision in the penal code regulating cases of attempted crimes. Since the report hit the national press, all chief prosecutor offices in the country are responsible for investigating the topic.”

However, many prosecutors don’t have the courage, Petek said, recalling that a former prosecutor in the province of Van was dismissed from duty first and then disbarred following an indictment he filed against Gen. Ya?ar Büyükan?t, who was later promoted to chief of general staff. “If there will be no investigations into these allegations, the conclusion that everyone will draw is that only the weak are tried in Turkey, while those holding power are left untouched. This is a bad situation for society.”

Sedat Karagül, a retired judge from Susurluk, also said chief prosecutors had to act the first day the alleged coup attempt reports appeared in the press. He said since the crime was committed at a time when the generals accused of attempting a coup were still in the military, the military prosecutor’s office was authorized in pursuing the case.

Meanwhile, Yusuf Ça?layan, a retired military judge, stated that the coup preparations being detailed in the diary allegedly written by Adm. Örnek constituted a crime under article 148 of the Military Penal Code. Ça?layan expressed his belief that such clandestine meetings or plans to overthrow the government taking place “outside the hierarchy” had dealt a major blow to the reputation of the Turkish Armed Forces.

Ça?layan also said he didn’t expect prosecutors to have the courage to start legal action into the diary after having witnessed the fate of Van’s chief prosecutor, who was sacked and barred from the legal profession after indicting Gen. Büyükan?t.

Bar associations across the nation also expressed support for Prime Minister Erdo?an’s call made to the prosecutors. Kahramanmara? Bar Association President ?smail Kahveci said both military and civil courts were obliged to question the allegations regarding an attempted coup.

“If this is true, it has to be brought to light,” Kahveci told Today’s Zaman.

Criminal complaint had already been filed

In a related development Tuna Bekleviç, leader of the Strong Turkey Party, a new political formation with member’s ages ranging between 18 and 30, said in a statement his party had already filed a complaint with the public prosecutor’s office of ?stanbul’s ?i?li district on the day the last issue of Nokta magazine was out. “We applied to the prosecutor’s office at 10:45 in the morning, the day Nokta came out; however, nothing happened after that. The only reply we got was a document saying the criminal complaint we filed was accepted.”

Meanwhile, the prosecutor’s office in Bak?rköy was also reported to have launched an investigation into the reporter and the editor responsible for the news story. Sources at the Bak?rköy office said if the news story was proven to be true, then the investigation would be expanded to include the retired admiral who is the alleged author of the report.

This news is a total 626 time has been read