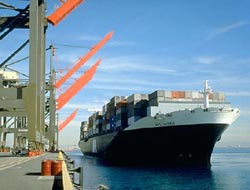 Neptune Orient Lines has delayed the delivery of all eight of its 10,000 teu newbuildings, and some chartered-in tonnage, as part of plans to save at least $250m in 2009.

Neptune Orient Lines has delayed the delivery of all eight of its 10,000 teu newbuildings, and some chartered-in tonnage, as part of plans to save at least $250m in 2009.

Neptune Orient Lines has delayed the delivery of all eight of its 10,000 teu newbuildings, and some chartered-in tonnage, as part of plans to save at least $250m in 2009 as it sinks into the red.

NOL said that it had delayed the delivery of both newbuildings ordered directly by the company and some it contracted on charter from other shipowners.

?We have successfully delayed some of the ship deliveries,? NOL chief financial officer Cedric Foo told a briefing for its annual financial results.

Company officials declined to reveal exactly which vessels had been delayed citing confidentially agreements with both owners and shipyards.

?It"s across the spectrum of the ships we have coming. We"ve been fortunate to have relationships with the owners we have ships coming from,? said NOL chief executive Ron Widdows.

However, a comparison of vessel delivery commitments in NOL"s 2008 results presentation compared to a similar data a year earlier showed that delivery of all eight of its 10,000 teu container vessels had been delayed from 2011 to 2012.

The eight vessels were NOL"s first venture into the 10,000 teu class vessel and ordered at a total cost of around $1bn from Korean shipyards in June 2007, and were earmarked to join the Asia-Europe trade on delivery. The order was reported by brokers to be split equally between Hyundai Heavy Industries and Daewoo Shipbuilding and Marine Engineering.

The move comes as many containership owners try to negotiate with yards to delay deliveries, although little in the way of success has been reported so far.

The delivery delays form part of a raft of measures which Mr Widdows would said would save it ?considerably more? than $250m in 2009 as it plunged into the red for the fourth quarter of 2008.

NOL reported a fourth quarter loss of $149m, compared to a profit of $196m a year early as trade volumes collapsed in the wake of the global financial crisis. The fourth quarter result was further hit by $72m in restructuring charges relating to its lay-off of 1,000 staff announced in November.

Part of the company"s cost savings is to lay-up vessels. According to Eng Aik Meng, president of NOL subsidiary APL, it has laid-up 15 vessels so far, split roughly evenly between hot and cold lay-up. Further lay-ups will depend on market conditions.

The company is also trying to renegotiate charter contracts, and a company official said it had had ?some success? in this area.

As part of cost saving initiatives NOL also said it would be returning expired charters and offhiring vessels. Through expiry of charters it can remove seven vessels from its fleet in 2009 and 2010, totaling around 60,000 teu in capacity.

One measure NOL will not be taking to save costs is diverting vessels from sailing from the Suez Canal to going via the Cape of Good Hope to save on fees for transiting the canal.

?We don"t plan to do that,? Mr Widdows said. ?I think that has a bit to with a desire to see the Suez Canal fees come down. I think if you had very many very, very large ships you might be incentivised to do something like that.?

In an effort to stem losses on the Asia-Europe trade APL is planning a rate increase although the levels have yet to be decided. A spokesman said the increase was planned for March 15 eastbound and April 1 westbound.

This news is a total 910 time has been read