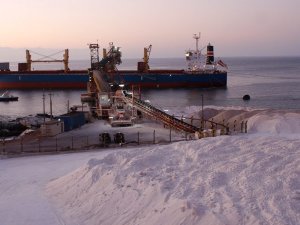 Danish shipowner Norden has signed a new 10 year contract with Chile's Empremar for the transportation of road salt from Chile to the US East Coast.

Commencing in 2020, Norden will utilise supramax vessels to transport a total of 4-5 million tonnes of road salt from Caleta Patillos in Chile to US ports between Boston and Baltimore. Norden will make 8-10 voyages per year, each taking around 30 days and passing through the Panama Canal.

Norden has been transporting salt for Empremar since 2000, and says the new contract guarantees the long term partnership between the two companies.

Michael Boetius, head of period tonnage & industrial bulk at Norden, commented: ''We are pround to extend our partnership with Empremar for another 10 years. This is not just fulfilling the ambition of strengthening our ties with highly respected partners, but also a contract with voyages that optimises Norden's existing business. The new contract enables Norden to position vessels at the eastern coast of North America where they can be deployed to fulfil other long term contracts carrying wood pellets to Europe.''

This news is a total 830 time has been read
Tags: Norden secures long term salt contract with Chile's Empremar