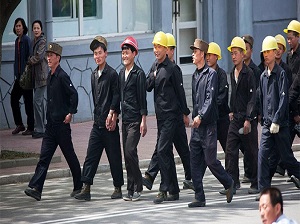 A North Korean labourer is suing a European shipbuilding firm for allegedly profiting from his slavery.

The worker, who is remaining anonymous, was sent to Poland by the North Korean regime and is alleged to have worked 12 hour days for low wages in unsafe conditions, according to his volunteer legal team.

He worked for Polish supplier Crist SA, which makes shipbuilding components that were supplied to a Dutch firm. Large chunks of his wages were confiscated by the North Korean state and he had his freedom of movement restricted. Lawyers say they are targeting the Dutch firm, which is not yet being publicly named, because the country has a law that makes “profiting from exploitation” illegal.

Hundreds of thousands of North Korean citizens are estimated to be working abroad in similar conditions of alleged modern slavery, where they must forfeit their passport and wages to the regime. The money earned in wages is valuable foreign currency that helps the North Korean government offset the effect of UN sanctions.